At Papatowai in the southern verge of the Caitlins you can't go past the green bus called the Lost Gypsy Gallery. It is one of a kind. 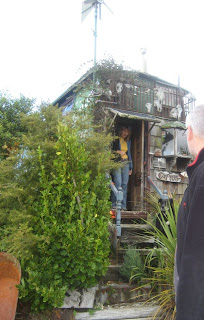 Already at the front door you can tell this is no ordinary bus. The pungas are carved with koru shapes an skeletons ride on old bits of bicycle. At the foot of the steps to the bus is a push button mounted on a wooden plank with the words "Life is full of temptations. This button is one of them." Most people consider a while before giving in to temptation to push the button. A thin steam of water showers the pusher. 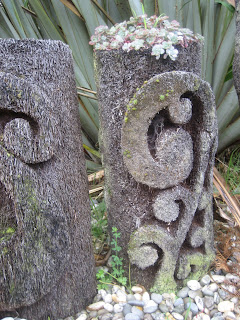 Blair Somerville sits in his green bus, the Lost Gypsy Gallery, and works away at this little wonders. They are part physics, part engineering and mostly humour. Once you are in the bus it is hard to escape as there are ever more little gizmos with winding handles to try out. Little feet walk or push along balls as you wind; a train winds around a track on the wall and sets off a series of little lights as it passes. As visitors chortle and experiment you feel Blair's enjoyment emanating from the little attached room where he works. He seems to have found the perfect opt-out employment, although one suspects he never opted-in in the first place. 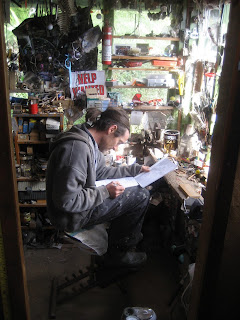 Posted by Elizabeth at 6:55 pm

I was just there in November. He has a new "exhibition" of sorts out back, with $5 admission. I was there 3 weeks before he planned to open it, and he let us get a sneak preview. It was pretty awesome, with larger, cooler, more complicated displays and toys - worth the money and time if you ever get down there again. BTW your picture of him is pretty funny to me, b/c when I saw him he had a huge beard. He explained he would not shave until he opened his new gallery. What a great guy!

We stopped by on 27 March. The $$ gallery is now open. It has a fabulous piano with each key linked to a combination of mechanical motion, light show, and sound. an amazing, complex instrument.

Many motion devices use paua or top shells.

Blair is a cool host and a fascinating artist.

Anonymous said...
This comment has been removed by a blog administrator.
5:42 am