The multiplier effect. If you have a few flowers you can turn the vase and imagine the rest.
Covid19 Isolation painting
Posted by Elizabeth at 4:54 pm 3 comments:

It is nearly the end of April and I haven't blogged nearly as much as I thought I would during this lockdown. I thought I might track changes as they happened, but instead one day has slid into the next and I have been consumed by painting. I look back at what I blogged and find that life was normal on 14 February and abnormal by 15 March. Actually the change happened in Sydney during the second week of March. On 1 March I had no idea that by 14 March I would be avoiding a big birthday bash I was planning to attend. On 7th I decided to self isolate. By the 13th I was no longer alone. By 23rd everyone was self isolating (or at least, everyone who had been watching the calamity unfolding elsewhere). The reaction of the Australian public is what had helped us avoid a major catastrophe here because we acted more quickly than our governments.

I had to do something to stop myself becoming obsessed with the virus and painting became my escape route.  I woke a couple of times this week, trying to solve painting issues on very large canvases, so I must paint through the night as well as during the day. Painting problems aren't the stuff of nightmares luckily. I suspect I am making up for a year of forced painting abstinence while I was house selling/buying as well.

Now I look back at 2019 and thank my lucky stars that I sold when I did and that I was obsessive in looking for a place to move to. I had a lease that was going to expire on 5 March. Instead I moved in November and now I am glad that I made the decision to break my lease, even with attendant difficulties.  I found a successor immediately, and that helped.

There is a little patch of garden here where I am now living which is worth gold during lockdown when even a few steps outside feels like freedom. The few plants I had time to plant before lockdown like their new home and have been flowering I picked all the pre-winter roses in pots or the garden (that was easy as there were not many) to paint and once I started painting them, it was hard to stop. There is something so charming and ephemeral about flowers. 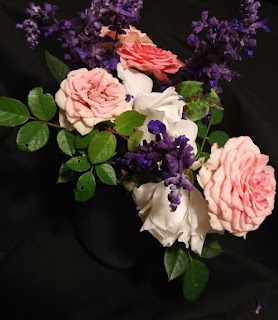 This is such fun in times of Coronavirus I will post it here. I copied it from twitter.

Once again The Washington Post has published the winning submissions to its yearly neologism contest, in which readers are asked to supply alternative meanings for common words.

The winners are:
1. Coffee (n.), the person upon whom one coughs.
2. Flabbergasted (adj.), appalled over how much weight you have gained.
3. Abdicate (v.), to give up all hope of ever having a flat stomach.
4. Esplanade (v.), to attempt an explanation while drunk.
5. Willy-nilly (adj.), impotent.
6. Negligent (adj.), describes a condition in which you absentmindedly answer the door in your nightgown.
7. Lymph (v.), to walk with a lisp.
8. Gargoyle 👎, olive-flavoured mouthwash.
9. Flatulence (n.), emergency vehicle that picks you up after you are run over by a steamroller.
10. Balderdash (n.), a rapidly receding hairline.
11. Testicle (n.), a humorous question on an exam.
12. Rectitude (n.), the formal, dignified bearing adopted by proctologists.
13. Pokemon 👎, a Rastafarian proctologist.
14. Oyster (n.), a person who sprinkles his conversation with Yiddishisms.
15. Frisbeetarianism (n.), (back by popular demand): The belief that, when you die, your soul flies up onto the roof and gets stuck there.
16. Circumvent (n.), an opening in the front of boxer shorts worn by Jewish men.

The Washington Post's Style Invitational also asked readers to take any word from the dictionary, alter it by adding, subtracting, or changing one letter, and supply a new definition
The winners are
-Bozone (n.): The substance surrounding stupid people that stops bright ideas from penetrating. The bozone layer, unfortunately, shows little sign of breaking down in the near future.
-Cashtration (n.): The act of buying a house, which renders the subject financially impotent for an indefinite period.
-Sarchasm (n): The gulf between the author of sarcastic wit and the person who doesn't get it.
-Inoculatte (v): To take coffee intravenously when you are late.
-Osteopornosis (n): A degenerate disease. (This one got extra credit.)
- Karmageddon (n): It's like, when everybody is sending off all these Really bad vibes, right? And then, like, the Earth explodes and it's like, a serious bummer.
- Glibido (v): All talk and no action.
- Arachnoleptic fit (n.): The frantic dance performed just after you've accidentally walked through a spider web.
- Caterpallor (n.): The color you turn after finding half a grub in fruit you're eating.
pick of the lot
- Ignoranus (n): A person who's both stupid and an asshole
👍

Posted by Elizabeth at 7:31 pm No comments:

Wealth changes people, that is now clear.  Some of the entitled have been too entitled to take precautions against this virus. Think of Boris boasting about shaking hands. Many put others at risk without qualms, like the golfing couple whose names are circulating on social media.  They knew they were infected but travelled to south Australia and took to the golf course anyway.  The entitled seem able to subvert normal processes with apparent ease, like the well connected folk on the Ruby Princess cruise ship. They didn't want to be locked in quarentine so the whole ship was allowed to dock and passengers disperse without any restrictions, resulting in the virus being spread far and wide in Australia. Under duress themselves, this sort of process corruption enrages people.

Sometimes it is odd comments by friends that cause one to do a double take. A friend who is newly wealthy (not super rich but well off enough to be able to stop work) commented that he is put out by having to change his plans for the winter.  I didn't have much sympathy.

On the other side are those who have never been entitled. As time goes on and people recover from the initial panic, there are signs of community caring everywhere. I was looking out the window just now, watching a neighbour (or perhaps their employee) maintaining the verge  in front of their house. He saw me watching and waved. I waved back. Normally people might nod and look away. I looked again and saw him making for my side of the road. We spoke though the window ...he wanted to know if I was ok and was I enjoying it here in my new home. Turns out his home is down the road but he is often at the house of the neighbours - probably family I would think.  so now we know each other's names - that is a good beginning to neighbourly relations. The interaction left me feeling very positive about the world.

Posted by Elizabeth at 12:33 pm No comments: