Puzzles seem the ultimate time waster don't they?  You work and work and when you have completed your puzzle you take it apart again. It is an exercise that rather reminds me of a kindergarten teacher my son had who told her young charges that if they didn't hurry in their tidying up she would throw all the blocks on the floor again. (She never recovered her credibility in the eyes of my son.)

Perhaps for that reason I have never done the puzzle I have had for at least 40 years. I had put it in the box destined for the op shop, but I wasn't certain all the parts were still there so I rather reluctantly decided I should check and I spread it out in the table. Well, part of it only as it has 1000 pieces and they simply didn't fit.

It started finding bits that fit together, and before too long I was completely captivated. Now I remembered how fun puzzles can be. Good, you do de-assemble what you have so carefully assembled, but isn't that true of so much in life? And the assembly process is like a drug, at least it was for me - I couldn't leave it alone.

It was also a very welcome distraction as I am not yet fully recovered. I am at that stage where you want to do stuff but can't.

I started last week on Tuesday. I had bits on the table, bits on a tray and bits on a large piece of foam core picture backing. 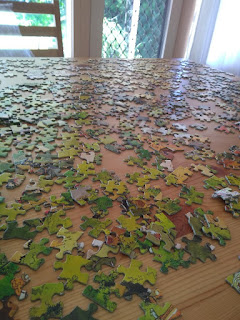 By the end of the day I had a bit of the bridge done ....very slow progress. 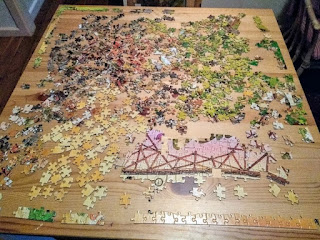 On Wednesday I did a bit better. I did the puzzle and ate, then returned to the puzzle. On Thursday I was on a roll. The more you puzzle the more intimately you know the picture you are trying to form so you find the pieces more easily. . By the end of the day there were only a few pieces left to do ...and they slotted quickly into place on Friday. 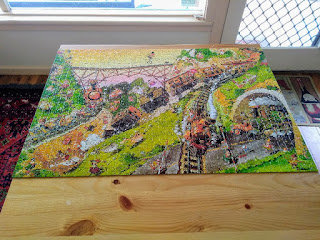 Then I took it all undone again, but with a great feeling of accomplishment. I am no longer going to discard it. I am sure it will be much quicker next time I do it. 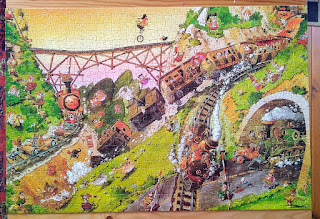 Posted by Elizabeth at 8:33 pm No comments: Links to this post

Email ThisBlogThis!Share to TwitterShare to FacebookShare to Pinterest
Labels: Puzzle

Over the past week I have been completely entranced by George Eliot's Middlemarch. It is so well written I have been reading very slowly, resisting the temptation to speed read and jump ahead to see what happens next, a temptation very real as it is like an intricate who-done-iit.  The characters are so well drawn, truely a masterpiece. I must have read it before, but so long ago that I had forgotten both plot and characters. 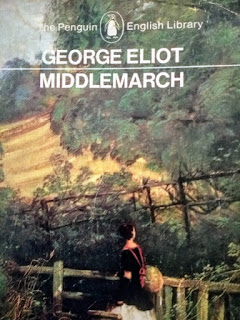 I have just finished it with a sigh of pleasure at ends so neatly and believably tied up. It has been a wonderful filler for wearisome convalescing hours, alternating with other sedentary exercises with knitting needles or crochet hook. Now however, the virus is slowly loosening its grip and I am able to take up less sedentary occupations.  What a relief.

George Eliot, I love you.

Posted by Elizabeth at 8:42 pm No comments: Links to this post

Convalescence project: A multicoloured woollen poncho, intended for a 9 year old violin player who complains of the cold on autumn mornings, then wraps herself in rug which hampers practice. 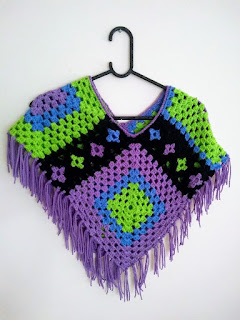 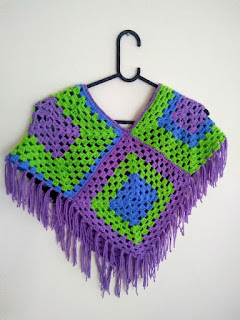 Posted by Elizabeth at 4:14 pm 2 comments: Links to this post

Email ThisBlogThis!Share to TwitterShare to FacebookShare to Pinterest
Labels: Poncho

It has been five days since the Christchurch terror attack. It feels like a month.

The previously much vilified Muslim community has been one of the sources of support and wisdom for those struggling to deal with the events in Christchurch.. They have had to deal with extremists in their own ranks, and seem wiser than the rest of us.

There are signs of new beginnings but already they are being trampled by those who benefit from the status quo.

We who have been watching our Australian political discourse are appalled at the carnage, but, as Waleed Aly so eloquently put it, we cant be surprised. Most of us didn't realise the viciousness of the monster our government helped create. Now we understand.

At first I was so angry, angry with those despicable politicians who have been promoting divisive racist, anti-Muslim and even more anti-aboriginal ideas for their own political gain. The anger remains, but a sadness too, as we see the offenders squirm and wriggle, trying to say the 'right' thing, only to inadvertently show how entrenched their views are. Australian  PM Scot Morrison blames social media, but makes no mention of the toxic Murdoch press which continues with its racist rantings to this day.

The automatic response for many (Christians) has been 'an eye for an eye',  but look where that got us. We urgently need a change to compassionate inclusive politics, a politics that disallows racist, misogynist hate talk, which is actually all about power.  If we create a society that strips power from racists and misogynists we can begin to build a society we all want to live in.  This means each of us calling out racist and sexist language where we hear it. It is all around us and if we make an effort,  pointing it out won't create enemies but instead help people become aware of how ubiquitous it is, and teach them to mind their language.

As others are pointing out, we need to act on several fronts including online. Talking about her newly released book  Troll Hunting,  brave journalist Ginger Gorman who interviewed trolls to understand them, says they hope for just such outcomes as the NZ terrorist attack. We can no longer disregard them.

All power to Jacinda Ardern and her clear sighted responses to this tragedy. She is going to need our support. We who want to avoid going down the path of strong man politics need to be even more determined than those who are going to resist change.

Posted by Elizabeth at 3:03 pm 2 comments: Links to this post

The cover of Framley Parsonage shows that I bought it for $3:50. I have forgotten where.

I read the first couple of chapters yesterday,, remembered the story ...then it was time for bed. I tossed and turned all night, remembering the silly young hero who wanted to be in with the in-crowd, signing his name to bills (I owe you's) for a 'friend', who was really no friend at all. He brought himself to the brink of ruin.

This morning I decided I would not read about his silliness but take the story up again where he came to his senses and told his wife his troubles.

It was easy to finish the book from there and tonight I'll hopefully sleep easier, having seen all the sympathetic characters rescue themselves and some of the doubtful ones as well. 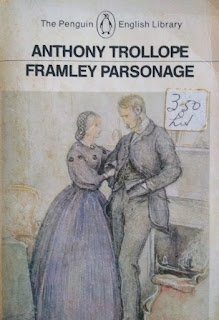 Anthony Trollope wrote his book before George Meredith wrote his.. Trollope's books are so much easier to read and much more fun than Meredith's.. Also much funnier than Meredith's The Ordeal of Richard Feverel, and the humour has not aged.
Posted by Elizabeth at 6:39 pm No comments: Links to this post

Well yes, all cats do have green eyes don't they?
Posted by Elizabeth at 10:30 am No comments: Links to this post 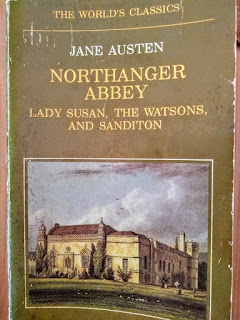 It's the perfect read for the indisposed. Light, witty, and light enough to hold up lying down.
Posted by Elizabeth at 4:52 pm No comments: Links to this post


I am feeling much better today after a sofa bound week. I made another little lamb painting to celebrate.

They say shingles lasts 3-5 weeks and I have had it 4 weeks, so I am hoping this is the elusive corner I have been waiting to turn.
Posted by Elizabeth at 5:51 pm No comments: Links to this post

Not Your Average Nurse

I heard a few episodes of this book on ABC Radio's late night program last year, then missed the rest,  so I ordered the book. It was a good light weight alternative to Goerge Meridiths book.

The author says she wrote it to tell her daughter about her life before becoming an author. For anyone who started nursing in the 1960s-70s, it will bring back lots of memories, and for the rest of us it is a fun read as well. 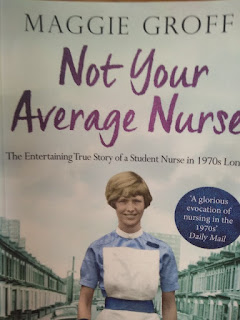 Posted by Elizabeth at 9:12 am No comments: Links to this post

Here are some lambs in springtime, painted from a picture taken years ago in Taihape.


My brother, who has had shingles twice, told me yesterday that he got better very gradually, not suddenly as perhaps I had been expecting. I got a watercolour pad out as diversion therapy during the gradual improvement.

Posted by Elizabeth at 10:19 am No comments: Links to this post

The Ordeal of Richard Feverel

The Ordeal of Richard Fevrel is apparently the most famous of George Meredith's novels. Born 10-20 years after Trollope, Dickens, Thackerey I thought this book might be just as accessible, but there is a reason why you seldom see it in bookstores.

I found it obtuse, meandering, full of a humour long past its use-by date (the forward says the first 2/3 of the book is funny, so perhaps it must have been, in its day) and with so many ornamental flourishes it feels like a Louis XVI chair. Only a bedbound and bored person would persevere with it ...but actually it was even too much for this bedbound person and I skipped a good deal of the end part.

I  must have kept it on my shelf because I thought I should give it some real time. Well I have done that now and it is now bound for the op shop.
Posted by Elizabeth at 7:18 pm No comments: Links to this post