It's windy though, said the pilots

Waiting at Brisbane airport to come back to Sydney after Peter Grimes,  I visited the Watermark Books and Cafe for a Campos coffee. Next to me were three Qantas pilots discussing their flights.
"Weather looks alright," they said.
"Yes, but it's windy."
A friend said later that comment would have stressed her out,  but I was so busy trying to sketch the pilots without being obvious that I didn't really think about what they were saying
It was a bit bumpy in the air, but nothing like the lumps and bumps on the way up two days earlier.
Posted by Elizabeth at 8:17 pm No comments: Links to this post

Brisbane is a city for cars, noisy racing smelly cars. The roar of cars is everywhere, sometimes loud, sometimes a dull roar.  Two days here is plenty for me because I've been a pedestrian. It's like being a pedestrian on a race track.

I am staying not far from the cultural centre of the city, the South Bank. To get there I walk over a bridge dodging down an unmarked  set of steps at the other side to get away from the roar. 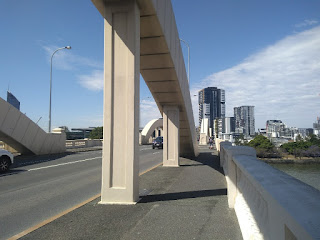 At the QPAC (Queensland Center for Perfoming Arts) last night the comments by two couples about my plan to walk home after the concert were instructive.
The Queenanders who had come from Melbourne 50 years ago said " Oh it's a short walk, you probably wont won't need a taxi. And it very safe too!"
The born and bred Queenslanders said " Oh that's a long walk!"
Those comments say a lot about Brisbane.  I did walk home and at a brisk pace it took little more than 15 minutes.

C'mon electric car makers, get a move on. Make our cities livable.

Posted by Elizabeth at 8:52 am No comments: Links to this post

How disappointing it must be for an artist to travel half way around the world to sing, then fall ill. That happened to Stuart Skelton this week.
I came up from Sydney to see the Queensland Opera production of Peter Grimes. I saw it this evening, a very successful semi-staged version.

Skelton managed the first act, then handed over to a stand-in. Although not well, he very generously acted the rest while his substitute stood at the side and sang from the score. It makes a big difference to have someone who can act the part on stage, even if they don't sing and Skelton is the quintessential Grimes.

Last time I saw a substitute sing in the wings was in Leipzig when a lead singer in Die Frau Ohne Schatten was ill and in that case an assistant marked the singers movements. It helped, but was not nearly as successful. This is when you realise that opera singers really have to be good actors as well as extraordinary singers. It is a very demanding profession.

21 Sept. Addendum: I got an email from Queensland Opera today apologising that Stuart Skelton was unable to sing the full performance. Apparently the doctor diagnosed severe pollen allergies. He'll apparently sing the full concert on Saturday.
Posted by Elizabeth at 11:34 pm No comments: Links to this post

The recent news that honey is not always honey reminded me of some South American olive oil I bought from a well known purveyor of organic foods a while back.  I discovered it was not olive oil only after I had used most of it (olive oil solidifies in the fridge) and since then I have bought Australian Olive Oil with a definite use-by date.

Today I discovered that coffee can also be dodgy. I am one of those smallish percentage of the population who can't digest coffea robusta beans so I always ask before ordering if the coffee is 100% arabica. I can tell if there are robusta beans in the mix as it has metallic taste.

This morning I dropped my car off for a service then made for the cafe selling Campos coffee down the road. It has changed hands and now it sells ' leaf and berry' brand coffee. I asked if the coffee was 100% arabica and the owner said very forcefully that "he wouldn't sell any of those other floor sweepings', by which he meant robusta beans. I said some people liked a bit of robusta in their coffee but he was adamant it was rubbish. I was still doubtful as 100% arabica was not written on the coffee packet so he checked with the agent who replied it was 100% arabica. So I ordered my coffee.

I took a sip.... it didn't feel right.  I looked up the coffee bean online and there was nothing about it being 100% arabica in the bean description. The metallic taste developed as I researched and I wondered who was telling fibs, the coffee company, the agent or the cafe staff?  The cafe manager had checked and shown me the agent's reply on his phone so it wasn't him. As left, coffee un-drunk, I told him I was certain there was a % of robusta in the mix. Arabica beans are more expensive and if he is paying for them, he should get them.

In checking online I had discovered that the firm selling 'leaf and berry' brand also sells the Gusto brand. I used to drink a daily cup of coffee at my local cafe, but they switched without notice to Gusto coffee and after a particularly bad reaction I decided to buy my own coffee machine. The cafe was sold shortly afterwards. A European cafe owner had told me that coffee firms offer large inducements (white goods etc) for  multi-year contracts and I felt sorry for the new owner.  The cafe changed hands a third time and now it sells 100% arabica coffee again - but I have my own machine and hardly visit.
Posted by Elizabeth at 2:29 pm No comments: Links to this post 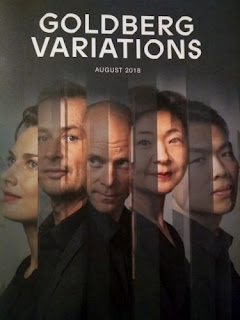 Bach's Goldberg Variations played by the Australian Chamber Orchestra, a concert I heard live then watched several times online. This was one of those uplifting concerts, memorable for their ability to express emotion. One of those concerts you'd love to hear multiple times.

Such concerts are difficult to put into words - thus the nearly four week gap between seeing and writing. Do see it if ever the Australian Chamber Orchestra play it in a hall near you.
Posted by Elizabeth at 6:43 pm No comments: Links to this post