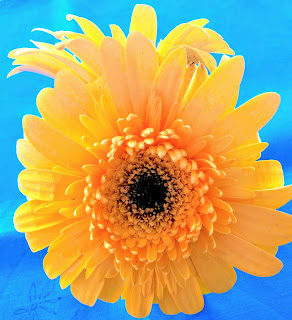 Posted by Elizabeth at 5:17 pm No comments: Links to this post

The honey-glaze on the ceramic dancers is an old recipe. It runs off a piece if not contained (which is why the figures were created as depressions) and it is too toxic to use on anything you want to eat off (which is why this is not a plate).

The piece was made in New Zealand with clay that fires to a light honey-colour. I didn't realise what a nice clay it is until I started making ceramics in Sydney where the art-school clay fires to a dull concrete-like gray.
Posted by Elizabeth at 4:00 pm 1 comment: Links to this post

Cockatoos on the roof. They want to be included in my series of  'fabulous ceilings'.
'

Posted by Elizabeth at 9:19 pm No comments: Links to this post

Email ThisBlogThis!Share to TwitterShare to FacebookShare to Pinterest
Labels: cockatoos

When the eight year old (previous post) announced she wanted a fox cub and her mother on the front of the partly knitted jumper I was making, I searched for some quad ruled paper to draw the foxes on and bought skeins of dark blue and dark green wool since the foxes had to be 'just like in the book' .

Today I sewed the finished jumper together.

As the foxes emerged I showed them to the eight year old - she thinks they are wonderful. Phew...
Posted by Elizabeth at 8:19 pm 1 comment: Links to this post

I am knitting a jumper for an eight year old with colours she said she liked ... mainly blues and pinks. 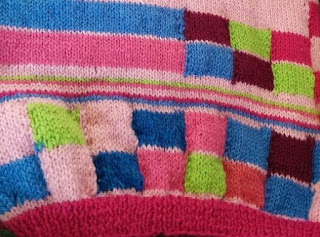 I get a bit bored with plain knitting (thus the ad-lib colours) so when I was a good way up the back, I asked her if she would like an animal picture on the front, perhaps a dinosaur?

She thought a while then said 'I know!' and hurried off to find the book with the picture she was thinking of.  It took a while to find, but she knew exactly what she was looking for and eventually emerged triumphant from her overloaded bookshelves.

'There!' she announced showing the picture. 'I'd like the mother and the cub please. And the snowflakes!'

'Hmmm,' I said, thinking of the half-completed back. 'Can I change the colours a bit?'

'No,' she said, 'it should be exactly these colours!'

Children are as absorbent as sponges and very impressionable. I thought it fascinating that this picture book has had such an influence on a child (who is now reading the hobbit) that she wants the mother and cub motive on her jumper.


Posted by Elizabeth at 11:03 am No comments: Links to this post

Emmanuel Pahud and the ACO 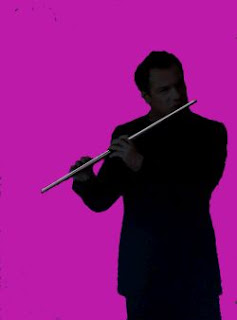 The hall was dimmed ... just a pinkish light at the back - and then a flutist started playing CPE Bach's Flute Sonata in A minor. It was a lovely way to start a concert.

What was even better was the next piece,  JS Bachs Ricercar a 6 from The Musical Offering played by flute and orchestra.

I have just looked up ricercar:


ricercar
ˌriːtʃəˈkɑː,ˈriːtʃəˌkɑː/
noun
Music
noun: ricercar; plural noun: ricercars; noun: ricercare; plural noun: ricercari
It was a fun and fabulous piece of music and hearing it for the first time I wondered why it is not played more often. Bravo Richard Tognetti for putting it in the program and to the ACO playing it with such verve.  Yes, it was an ACO concert and the flutist was the brilliant Emmanuel Pahud.

Posted by Elizabeth at 9:46 pm No comments: Links to this post