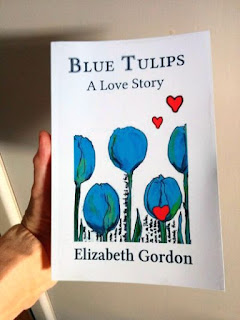 Yaay! I got my copy of Blue Tulips: A Love Story in the mail today!

Blue Tulips: A Love Story is a book that demonstrates how potent Wagner's music can be as a love potion (and aphrodisiac!)

Blue Tulips: A Love Story is now available as paperback

Wagner's Music as Love Potion? Blue Tulips: A Love Story is a book that demonstrates how potent this love potion can be.

Blue Tulips: A Love Story is now available as paperback

Posted by Elizabeth at 11:28 am No comments: Links to this post

One would not normally compare a chamber orchestra with an opera company, but I happened to see the Australian Chamber Orchestra and an Opera Australia production within days of each other this month, so here is my take on them both.

In the nineties OA put on a wide variety of operas from a wide variety of composers with wonderful singers, mostly Australian. It was an exciting company. Then the management changed and every production seemed to be a reality TV show. Perhaps someone thought it was the way to win a younger audience but avid opera fans drifted away. I got a subscription to the Australia Chamber Orchestra instead and discovered a vibrant  band of passionate players who have so enriched my life that I can only thank OA for sending me in their direction.

I had chosen to see Opera Australia's production of King Roger because it was billed as 'something different' but I probably wouldn't have gone to the ACO Murder and Redemption concert if I had not had a series subscription because it included American folk songs and I couldn't imagine how they could be combined successfully with a classical offering. So I expected more from one concert than the other.

Unfortunately I found King Roger underwhelming. The music itself is worth hearing, but I found the production too similar to other over-sexualised or pop-culture OA offerings. The program notes described how the composer Szymanowski struggled with his homosexuality, so a reference to this would have been understandable, but the surfeit of writhing and thrusting male dancers that was presented made me feel as if I was watching an American sitcom where every facial gesture is overdone. My seat-neighbour was similarly under-impressed, telling me he had seen the Edinburgh version which interpreted the opera as the struggle of transformation. It sounded like the one I would have preferred to see. I have seen several concert performances of opera since I gave up my AO subscription and find them much more satisfying than overblown productions.  I read however that the current La Traviata is a winner, so perhaps I shall have to give OA another try. 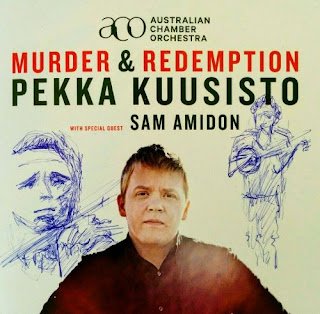 In comparison, Murder and Redemption with Finnish violin-wizard Pekko Kuusisto leading the ACO way overshot my expectations. Folk songster Sam Amidon sang his songs with becoming naturalness (in  the best American folk song tradition) but what surprised me was how they complemented the classical pieces by Janacek and John Adams.

I am not sure why exactly, but Amidon's songs gave the ACO's passionate version of Adam's Shaker Loops a special zing.

The ACO has exceptional curatorial skills and  this program was just another example.

I sat there wishing I had brought my 17 year old music friend with me.  If you want to induce that generation to go to a classical concert, this was the sort of music you would choose.
Posted by Elizabeth at 4:57 pm 2 comments: Links to this post 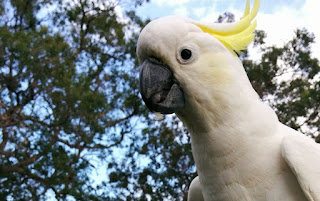 You think you have outwitted the cockatoo, but then he shows you otherwise. Y
Posted by Elizabeth at 9:19 am 2 comments: Links to this post