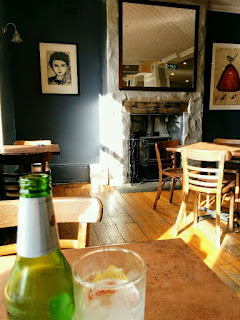 Hobart seems to be full of small businesses run by very friendly people. I just had a beer at a nearby corner pub. It's called The Duke and it is the type of pub that would encourage me to be a drinker if it was located near where I live. It was early (6pm) and a couple of kids (12 year olds?) played pool in one room, two women with wines and some delicious fish 'bar food' were in the next door room and I took my beer and sat in an adjoining area where the sun was streaming in through the window.  After a while the owner came to check if I was happy with just a beer (I had prevaricated over food) and as I left his wife (I assume?) gave me such a friendly smile and wished me goodbye.

I had decided on dinner at 'home' so I went over the road to the Soup Stop to get a takeaway soup. The Indian family there were equally friendly and the pumpkin soup I took home was delicious.

The built environment however is not so inspiring. There are many fine old stone buildings in Hobart but my overriding impression of the city is of traffic. Most roads through the city are one way so they are four lanes. Four lanes of ever churning traffic. It seems that those on the east of Hobart have to change places with those on the west very regularly. I have seen a few buses, but not many, and none on these main thoroughfares.

There are some very picturesque spots on the wharf with stone houses and moored yachts, but mostly it is large tin sheds and bitumen roads.

I brought my painting kit with me to Hobart but in vain. There are some pretty spots but they are outnumbered and overshadowed by the ugly developments around them.

My view from a coffee shop towards the wharf this morning was depressingly drab so I painted a child at the next door table. He was looking out at some bikers preparing to ride. They were no doubt happy because the roads appear to be in good repair. Pedestrians and painters though are less well catered for, which is a real shame as Hobart has so much potential.

Posted by Elizabeth at 7:41 pm

Email ThisBlogThis!Share to TwitterShare to FacebookShare to Pinterest
Labels: Hobart