Photos of New York often seem to me rather magical, if somewhat alienating, with the tall buildings and rushing people, but then I realise that Sydney is not very different. We hurry to our destinations between the tall buildings without looking upward. The Angel Place Concert Hall is one of those destinations.

The hall is squeezed into an alley overshadowed by very tall buildings. It is a bit like those beautiful old churches you discover in back alleys in Paris and Rome which are sometimes built onto by newer buildings to the extent that they almost disappear. Rather than detracting from the buildings this squeeze somehow it makes them more interesting. In Angel Place you feel as if you are in a magic place for music lovers, a place connecting past with present.
Posted by Elizabeth at 11:26 am No comments:

You have to be pretty good to be touring internationally at 72 years old and pianist Nelson Freire is definitely pretty good. The program notes for his September concert in Sydney tells us he doesn't like to have a set program because he likes to play what he feels like playing at the time, as that is best for both the audience and himself. Happily he felt like playing Bach, Beethoven, Debussy and Chopin, deftly transporting his audience on a captivating journey.

Both Freire and Elisabeth Leonskaya, who played in Sydney in August, demonstrate that age is no disadvantage for pianists, but rather the opposite.

At the other end of the age scale for solo pianists is Jayson Gillham who played in Sydney last week.

Gillham is a young Australian pianist who grew up in central Queensland and reached the semi finals of the Sydney Piano competition at 17. He won the Montreal Piano competition in 2014 and now lives in London.

He played  Bach/Handel/Chopin to his appreciative home crowd. I am sure they will return to hear more of his meticulous playing whenever he decides to return.
Posted by Elizabeth at 11:50 am No comments:

Andrew Goodwin has a voice I would like to tune into every evening. On Saturday, accompanied by the Australia Piano Quartet, he sang Strauss' Morgen (swoon) at the Sydney Opera House Utzon room, then several works by Schubert including Die Forelle (The Trout). Muhamed Mehmedbasic joined the APQ to play the Trout Quintet (Piano Quintet in A major) after the interval.


I had been tired after a busy and stressful week but I knew this concert would sooth and revive, and I was right. I could have sat there happily for another three hours listening to this group and this tenor. Thank you APQ, Andrew Goodwin and Muhamed Mehmedbasic.
Posted by Elizabeth at 10:06 pm No comments: 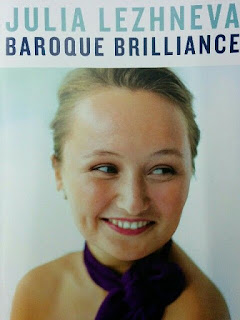 Julia Lezhneva is a Bel Canto singer sublime. In an ABC  radio interview a couple of years ago I heard her say she had not liked Bel Canto singing particularly but then found she was good at it. She had been in Tasmania for the Baroque Festival and when I heard her on the radio I decided that if she came again I would definitely try to hear her.

Now she is back, singing with the Australian Chamber Orchestra. I heard her first concert and it was simply a joy. She is a captivating and very generous singer, singing several (long) encores with her perfect, subtle, extraordinary voice.
(Listen to her here ... I recommend this CD for endless pleasure!)

The Australian Chamber Orchestra played differently tuned instruments with gut strings and, together with exceptional visiting oboists and lute player, gave a stunning performance. It is the mark of exceptional players when they can modify their playing to bring the best out of their collaborators. Bravo and brava!
Posted by Elizabeth at 10:09 pm No comments:

I have hardly touched  my computer this last three weeks. Instead I took part in a local group art exhibition, spent time child minding for a mother who was racing to finish a Masters Thesis during school holidays and helped an HSC student revise for finals exams. I also spent more time in the garden because it is spring and everything needs doing at once.

I am converting the driveway into a vege garden and a few weeks ago I planted some spouting potatoes in a spot so hot and sunny that not much grows. When the first summer heat hit the potatoes wilted and died and I expected little of them. Today I dug the soil over and discovered I have quite a crop.  Some of them are tiny, but I shall eat the lot!
Posted by Elizabeth at 9:55 pm No comments: