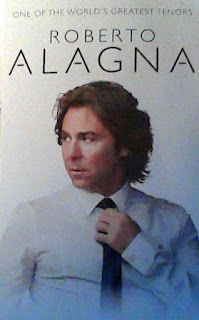 Have you ever heard Nessun Dorma sung to the tune of Funiculì, Funiculà? No? Well people who attended the Roberto Alagna concert at the Sydney Opera House last night are one up on you.

After a successful and quite lengthy programme of opera arias, orchestral interludes and Neapolitan songs including the aforementioned Funiculì, Funiculà, Roberto Alagna and his collaborators, including the delightful Aussie soprano Siobhan Stagg who is making a name for herself in Europe, gave us an encore that got a great reception. In fact the audience gave Alagna a great reception from the word go, clapping furiously as soon as there was the smallest gap in the music. That was not surprising as Alagna is an engaging performer and, after all, who wouldn't want to be wooed by a tenor with a magnificent voice who is good fun into the bargain.

Anyway, after the first encore there was a short discussion between the performers and conductor as they decided about a second, and probably unplanned for, encore. Then as the conductor held up his baton for a repeat of Funiculì, Funiculà,, a voice was heard from the audience calling 'Nessun Dorma!' The public laughed, the orchestra began and then we heard a very novel performance of Funiculì, Funiculà. As each line ended, Alagna (and later Stagg) added the words 'Nessun Dorma' to the end.  It caused a great deal of merriment in the hall. Perhaps this version of the Neapolitan classic could be named 'the Sydney version'.
Posted by Elizabeth at 5:58 pm No comments: Links to this post

You wouldn't think that someone suffering from a high level of cerebral palsy would be able to play a music instrument would you? Nor would you think they could play with a professional band but the Australian Piano Quartet and Jessica Irwin have proved that it can happen and that the result can be stunning.

Congratulations to Rebecca Chan and the APQ for showing us how limiting  our preconceptions can be. The APQ have a residency at the University of Technology Sydney and for this project they worked with the folk who build software which helps the less-abled manage life.

Rebecca Chan wrote the piece Whispering Pectoriloquy in collaboration with the team which enabled Jessica Irwin to play synthsiser. Chan is a trained as a doctor and said she imagined synapses firing while writing the piece. I have a similar background (though I am a biological doctor not a medical one) and I thought the description very apt.

Jessica's Irwin's eye movements were shown on a screen so we could watch what she was doing, but even if we had not been able to visualise her work we would have been able to hear how good it was. The piece got a standing ovation at the Sydney Opera House Utzon room yesterday and it was well deserved. I am looking forward to hearing more of Chan's compositions.

Look Jessica Irwin up on her website - she is a phenomenon!
Posted by Elizabeth at 9:27 am No comments: Links to this post

Impassioned, fun, fabulous, mesmerizing. Yes, all of those things describe the Sequenza Italiana concert given by musicians of the Australian Chamber Orchestra with visiting cello-virtuoso Giovanni Sollima. I sat in the concert wishing everyone I knew could be with me watching this passionate and competent group of people.

Maxime Bibeau (Double Bass) and Satu Vänskä (Violin) played sequenza by Berio, pieces written specifically for their instruments and intertwined by the players to make a fascinating whole. Bravo Max and Satu! Satu later played a piece by Paganini, relaxed and happy and with her flying fingers showing us just how lucky we are to have her here in Australia.

When Sollima played I wished all the under 20's of my acquaintance could be with me. They would
have learned in a single concert the fun and joy of classical music.

Sollima plays every part of his instrument, not only the strings but the wood and even strut that holds his cello from the floor. I think he'd play the music stand if he had one. The interesting thing is that it doesn't seem contrived. The sounds he produces from wood and metal are different from those produced by the strings and are an essential part of his composition. By the time his piece finishes it doesn't seem strange that he is playing the instrument as a whole, wood, metal and strings.


I wrote yesterday about my pre-concert experience and to have it followed by a captivating concert such as this, well you can see why I was lost for words. All I can say is that it was a day I shall not forget.
Posted by Elizabeth at 9:30 pm No comments: Links to this post

I had an experience today that I find very difficult to describe.

It was a drab old day in Sydney, not cold but with lowering clouds and sporadic rain showers. Not a day you expect to be overwhelmed and left breathless and weeping in the space of a minute or two.
As I walked out of Wynyard Station I was assailed by the scent of Narcissus flowers, harbingers of spring. I am still not quite used to Narcissus flowers being sold when autumn is barely over and 'winter' has not quite gripped us, but then what we call winter in Sydney is more like spring in harsher climates.

This was what I was thinking as I strode off to the the Museum of Contemporary Art. I was going there to see 'Telling Tales', an exhibition that includes a sung work Sonic Blossoms by artist Lee Mingwei. A classically trained singer (there are several who take turns) chooses a random member of the public and sings a Schubert song to them. I am acquainted with one of the singers and was hoping to hear her sing.

In the nominated third floor exhibition room there was a large work called Goowoolem Gijam – Gija plants by Aboriginal artist Shirley Purdie that took up most of one wall. The other works in the room were by artist Emily Floyd, comments on the Soviet Gulag which, as the wall plaques declared, resonate with Australia's offshore internment camps and policies affecting remote Aboriginal communities.

Some time after midday a tall smartly dressed man with a rather dramatic coat appeared (baritone Andrew Moran I discovered afterwards).  He led a woman from the assembled onlookers to sit on a chair in the middle of the room, then withdrew to stand perhaps eight meters away to deliver his song.

I am not sure if it was the already emotionally-charged space, whether it was Schubert's music/words or whether it was Andrew Moran's extraordinary baritone voice but in the space of four minutes I was an emotional wreck. Is that too strong an expression? After the song I walked out of the MCA weeping and emotional, heading for a quiet corner where I could sit and think and figure out what had happened to me. Eventually I wrote a note (writing helps me digest experience) and emailed it to myself.
This is what I wrote:
My body feels as if it is too small for my heart which has suddenly grown four sizes bigger. Half an hour ago I was was present when Andrew Moran sang a Schubert song to an audience member of the MCA. I was not the person sung to but despite that, this single song touched me in a way one is seldom touched.
It is true, I weep when I hear Liebestod at the end of Tristan and Isolde, but that is to be expected after four hours going through an emotional wringer. The Schubert song was only a couple of minutes long, but sung in a way that reached right past any defenses I might have had and left me breathless and weeping.
Now I am sitting quietly in a corner with a consolatory beer, trying to get a grip on myself before I go to the ACO/ Giovanni Sollima concert. Will the concert make my malady worse?

Now it is evening. As I returned home on the train I thought about this extraordinary day that has been almost impossible to describe. (More on the concert later.)  Ex PM Paul Keating struggles to explain the effect of Mahler's music has on him; Wagnerians join societies to search for words to describe their feelings;  I write a blogpost in an effort of describe a Schubert Lied. We all fail because there are no words. 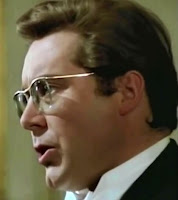 Posted by Elizabeth at 10:15 pm 2 comments: Links to this post

As an antidote and to gain understanding I decided to interview women about their war time experiences. My project grew and grew, and I grew with it. All in all I interviewed twenty two German and nine English women. I had to take a break in the middle as I was so overwhelmed by what I was hearing. I summarised the German transcripts in English and researched the period in the library in Wiesbaden. But then I started studying (not history) and put this project aside for some future date. 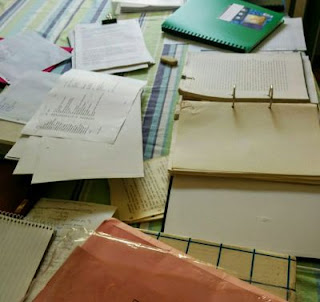 Now the future has caught up with me. It was a difficult project and perhaps that is why I put it off so long but I kept the box of tapes, transcripts and research and the box survived my many changes of abode.

When I looked at the transcripts again, I realised  that they are much more interesting than my original summaries. I am now re-translating the interviews from the original transcripts and digitising the tapes that survived the intervening years.

I am hoping to find a print outlet to take up this fascinating material, but in the meantime I have my head down and am busy in the world of 1940s Europe. It is non-visual,  thus the dearth of blog posts.

Posted by Elizabeth at 7:27 pm No comments: Links to this post