Who can resist them, beautiful sunsets?

The sunset this evening was a stunner, with the gods shining a red torch on the undersides of the lumpy grey clouds transforming them into a sight to gasp at.  Then five minutes later they switched the torch off and it was all over ...
Posted by Elizabeth at 8:14 pm No comments: Links to this post

Email ThisBlogThis!Share to TwitterShare to FacebookShare to Pinterest
Labels: sunset

Education and Brexit: Go the Scots!

The Scots have a very long tradition of respect for education, believing that everyone from the top to the bottom of the social spectrum, both girls and boys, should have a decent education.

'In August 1560 the ... Scotland [became] a Protestant country. The Reformed Scottish Church recognised that education had to be a national priority, both for its intrinsic worth but also to ensure everyone could read the Bible.' [from: University of Edinburgh website]

This eventually lead to the enlightenment in the eighteen century, earlier than most of Europe.

Education is still important in Scotland and I suspect that this has had an effect on the Scots vote to remain in Europe. A more educated population is not as easy to mislead and the Scots may well thank their system in future years if it enables them to continue to reap the benefits that a European common market delivers.

As I write, it is not yet clear whether England will actually leave the EU although the European politicians, understandably tired of being continually poked in the eye by the UK,  are urging them to take their bat and ball and leave. It looks as if it might be crunch time for the Brexit politicians locally as well now that all their posturing is shown to have been built on untruths.

Deservedly unloved on both sides of the channel.
Posted by Elizabeth at 8:47 pm No comments: Links to this post

They Brexited and everyone seems to be in a state of shock, though I don't know why. It seems to me that the British people have been skeptical about the value of Europe for a long time. 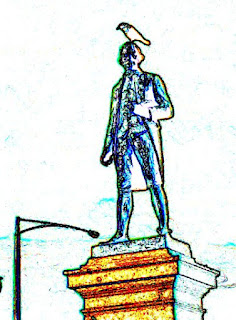 I was brought up in a pro-British household where grandmother still called England 'home', so I was amazed when I lived in Europe to discover how behind the times the English were. Whenever there was a proposed change for more equality, for example for women, it always seemed to be the British holding back the change. Ever since then I have wondered whether a Brexit might actually help Europe (though I feel sorry for the British).

The British view of Germans continues to be one influenced by war propaganda and the TV series Hogans Heros. - so they think Germans are evil or buffoons. An English friend who teaches German in an English school told me that when the soccer world cup was held in Germany, English reporters sent reports back saying 'People here are actually quite cultured.'  They were astonished that the German police danced in the streets with the crowds.

The elites have obviously found it in their best interest to keep the uneducated uneducated, all the while ripping them off unconscionably. Why are they surprised when the hens come home to roost? As someone immediately wrote on my twitter feed The United Kingdom 1707 - 2016.


Addendum on 25June:  this morning I heard Sadiq Khan, new Major of London, say that over the past 20 years whenever a Prime Minister has gone to Europe to negotiate a deal, they have come home and criticised the EU.  I thought it a very valid point and now I wonder how they will manage without this convenient whipping boy.

Posted by Elizabeth at 3:04 pm No comments: Links to this post 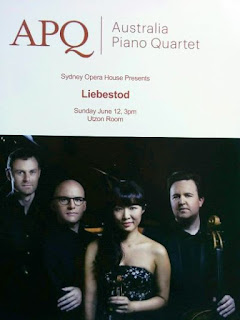 The woman in the seat next to me at the Australia Piano Quartet concert at the Sydney Opera House Utzon Room yesterday was reduced to tears by their playing of the Liebestod from Wagner's Tristan and Isolde. As she blew her nose afterwards and tried to recompose herself, I reflected on the power of music to move us. The piece had been arranged by the APQ for quartet so there was no soprano, but this music is so evocative that an instrumental version played by a virtuoso group like the APQ is capable of exciting extreme emotional response.

I saw virtuoso pianist Lang Lang play Tchaikovsky, Bach and Chopin last night and I have been trying to find a suitable noun to describe him ever since.  He is virtuosic of course and he is young and he is charming, but still there is so much more to him. I have decided the word is 'tender'. He plays the piano with such tenderness, even when he is playing Chopin's fiery Scherzi.

I was sitting in a box opposite the piano so although I couldn't see his hands on the keyboard I had a good view of his extraordinarily expressive face as he played. He smiles a lot, finding all sorts of amusement in the music. His body moves and jumps as it reflects the stories he is telling with his hands.
I was entranced to see his hands when he lifted one or other off the keyboard occasionally because they hovered like expressive, relaxed, floating flowers describing the melody in the air.  His audience couldn't help be captivated.

"Don't throw it away before you need to, you just create more landfill," said the technician when I told him my heat pump was no longer working as it should.

The first arctic blast of winter blew through last weekend and I had rung him for advice. This house, like so many in Australia, is very cold in winter (I measured 9C inside on Saturday and we still have autumn) and the heat pump struggled to bring the temperature up to 15C. 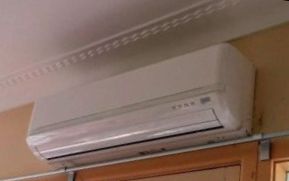 When the technician saw the unit he said it was probably 20 years old and the company that made it (Sharp) no longer existed. In an old house everything seems to need replacing at once and, like the guttering, the heat pump was overdue. So I bit the bullet and ordered a new one - a Mitsubishi Heavy Industries split system.

This morning it was installed and yaaay, I have heat!  The new system is much quieter than the old and probably much more energy efficient as well. It heats, cools, and generally just hangs out on the wall.


Posted by Elizabeth at 2:21 pm No comments: Links to this post