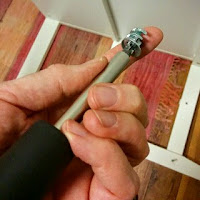 I am a sucker for Ikea build-it-yourself furniture. My favorite toy as a child was a Meccano set and Ikea is Meccano for adults. I doubt I would be so tempted by Ikea furniture if I didn't have to screw it together and, like Meccano, know that the bits fit together faultlessly.

After building kitchen cupboards a couple of years ago there has been a hiatus but last week I gave away the small bar table to a student who needs to stand at her computer instead of sitting all day.  As a replacement I bought an island bench.

Ikea staff had to help me load the three heavy boxes into the car and I drove home carefully, aware that they could become lethal missiles in an accident.  By the time I had them in the kitchen at home I was too tired to think, but still I couldn't resist opening the boxes and reading the assembly instructions before I went to bed.

The island bench is easy to construct but you end with it upside down. It was far to heavy for me to turn over, even with ingenuity, but my friendly neighbour and her son came to my rescue. Once it was the right way up we stood admiring it and asking ourselves why the kitchen looks much bigger with this big bench than it did with the small bar table. It has made a remarkable difference. 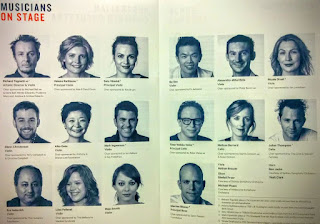 The Australian Chamber Orchestra is a phenomenon.

Last week I saw them play a concert of Bach, Mozart and Beethoven's Grosse Fuge and was reminded anew that a passionate, technically brilliant and astutely lead group of musicians can translate masterpieces into listening experiences that give one a glimpse into eternity. Music is one of the ways we can reach outside of our world, so I don't think it is hyperbole to talk of eternity.

As I sat listening, I felt so very grateful that this group of consummate professionals is willing to subordinate their other pleasures to a life of practice and study, enabling their audiences to travel outside of themselves, see meaning where they thought there was none and take courage to live. If you think I am using extreme language, go and see them and hear for yourself.

Posted by Elizabeth at 5:54 pm No comments:

When I was in Paris last year one of the few things I bought was some tea from the Dammann Tea shop.  It was labeled Earl Grey Yin  Zhen I bought it mostly because I liked the little black and maroon tin. 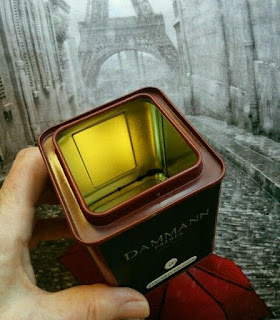 When I got home and tried it I wished I had bought two tins as it was a delight to drink, large leafed, with some lavender petals and not too much Bergamot flavouring.  It has become my preferred afternoon brew and I have been drinking a cup most days, but eking it out to make it last, using just half a teaspoon of tea for my one cup pot. Today I drank the last brew from the little tin.

Lamenting my dwindling Paris tea and wondering if I would have to visit again to get some more, today I discovered in the local supermarket a tea labeled French Earl Grey Tea. It is from a UK company called 'Higher Living' and I could see though the cellophane that it is large leafed black tea with lavender (and rose) petals.

Tomorrow I will see if it tastes as good as my Paris tea. I might not have to make the trip after all!
Posted by Elizabeth at 8:38 pm No comments: 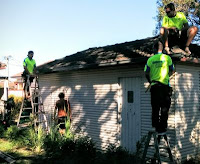 Back to things more prosaic -  in this case, guttering. The gutters on this old house were long past their replace-date and when they were removed last week I'm told they were so thin in parts that "it was like cutting paper".

I calculated it would take two days for the guttering to be replaced on house and garage, however four men arrived at 7:30am, worked like clockwork and by 12 noon they were finished.

Posted by Elizabeth at 8:54 pm No comments:

Portrait of an eleven year old

My portrait of eleven year old Kurtis is finished. It is a large work (though not ginormous) but I find I enjoy making large portraits. As usual it went through several iterations and some frustration on the way to completion. It took me a lot of fiddling to get his face just right and as usual, I thought it would never 'work'.

I had originally intended to add one of Kurtis's drawings in the background (his favourite subjects are drawing and maths) but instead I added a hand. He posed for me next to the painting so I could draw his hand. 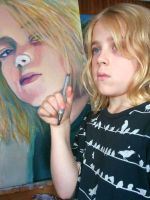 Katie Noonen and the Brodsky Quartet in Sydney

Last week when I heard the Katie Noonen singing with the Brodsky Quartet (broadcast from Brisbane by ABC ClassicFM) I was sorry I hadn't arranged to see them in Sydney. Then I got an email from the Sydney City Recital Hall, realised that they were performing in Sydney the following Monday and bought one of the few remaining tickets. I saw them last night.

The first half of the concert were classical pieces set to poems by Judith Wright which had been commissioned by the group and written by Australian composers. They were remarkable; enjoyable despite being miked. (Katie specialises in pop/jazz/rock and I imagine her very distinctive voice transports better with a mike.) Her mother, I discovered later, is soprano Maggie Noonen and they sometimes perform together.

I loved the classical songs but I suspect many of the audience were like my neighbours who enjoyed the post interval Elvis Costello jazz songs better. The audience obviously knew and loved these songs and sang along with Fragile,  the very last song of a generous two and a half hour performance.

Hopefully the Judith Wright poetry compositions will be played often and in a few years audiences will be able to sing along to those as well.
Posted by Elizabeth at 4:05 pm No comments: