Selby and Friends in Sydney

Music in an intimate atmosphere is what Selby and Friends seem to achieve regardless of whether (like the City Recital Hall in Sydney's Angel Place) the venue is  a little too large to be called intimate.

On Thursday night pianist Kathryn Selby played at Angel Place with two gifted string players, violinist Andrew Halveron and cellist Timo-Veikko Valve, a combination so successful that my concert buddy immediately went looking for a brochure so she could book more concerts in the series.

Valve introduced the second piece, Busoni's Variations on a Finnish Folk Song, by saying it captured Finnish melancholia so well and I prepared for a mournful dirge. Instead Valve seated himself at his cello and played a firecracker of a piece - yes perhaps melancholic, but also exceedingly energetic. A  riveting piece played by a fantastic cellist.

The Schubert Fantasy that Halveron chose to play us after the Busoni was an inspired choice. Very different to Busoni, very Schubert.

Kathryn Selby is an enviable pianist and chooses equally passionate partners to play with. This was a  dream team.
Posted by Elizabeth at 3:53 pm No comments: Links to this post

Whether a painting is successful has a lot to do with composition and if you get the composition right before you start, painting must be so easy. Unfortunately I don't seem to be able to pre-compose paintings. Instead, try as I might, they grow organically amid much tearing out of hair and rubbing off of colour.

This painting is an example.  I bought some lilies but they were in bud and all but one dropped off the stem before they opened.  The only bloom in the garden was a giant orange hibiscus flower but I picked it and put it on the vase with the lily. This was not a flower combination I would have thought of painting  but I had a square canvas on the easel I wanted to try as a change from oblong and before I had a chance to reconsider, I began to paint these awkward flowers. I added my Nana's little honey pot to give the flowers some sort of counterweight. I have had the honey pot for years and am fond of it even though, like most of her ceramic objects, it bears the marks of robust family wear and tear.

Getting to the flowers and honey pot was not so simple though. I changed the vase (the original was rectangle glass), I changed the pot (before the honey pot I tried a pottery sugar bowl), I put a cloth under the vase then removed it and I almost painted over the whole thing with Gesso several times. Now I have decided to leave it for a few months to see if it grows on me.
Posted by Elizabeth at 5:24 pm 1 comment: Links to this post

Pekka Kuusisto and the ACO Collective in Sydney

The lights go down and a young man steps onto the stage.
"Hallo, " he says to the audience, "my name is Pekka!"
"First of all I would like ot thank you for coming. It is always so much nicer to play for an audience!"

Pekka Kuusisto is the newly appointed Artistic Director of the ACO Collective, the younger sibling of the ACO which was previously known as ACO2 and if you hadn't yet read the program, Pekka's accent would tell you he is Finnish.

Pekka is a proponent of modern music and for the first half of the concert he had chosen seven pieces by three different living composers (Muhly, Tüür, Dessner). He had re-ordered the three movements of Erkki-Sven Tüür's Action-Passion and inserted the other compositions between them.

Not everyone would have the courage to re-order what a composer has written but it was a move that paid off: the first half was captivating. Not only did it showcase the musicianship of these up-and-coming young musicians, it was music they obviously enjoying playing.

"Oh that was just marvelous," said the elderly gentleman sitting next to me when they finished.

The Sibelius and Beethoven pieces played after the interval complemented the works chosen for the first half.

So bravo Pekka - your concert made those of us who didn't know you realise that we we have just acquired a (or another!) Finnish treasure.

Posted by Elizabeth at 4:56 pm No comments: Links to this post

Picasso used to re-sign his paintings when he added to them so some of his paintings have several signatures. If I were to follow suit, my peaches painting would now have three signatures because it has grown once again.  When you paint something that seems incomplete it nags at you until you change it and the peaches painting has been doing a lot of nagging.

It started in December 2014 like this:
It sat quietly in the studio for a year, then suddenly earlier this month it morphed into this:
I hung it on a wall but it still wasn't very happy. It eyed the pumpkin vine growing in a vase in my studio and wanted some for itself. So now it looks like this:

Like the vine, my paintings have a mind of their own and grow while your back is turned. I am hoping this one is now replete and happy to stay as it is. Perhaps it is time to sign it?
Posted by Elizabeth at 7:28 pm 1 comment: Links to this post

As I write this I am listening to Garrick Ohlsson playing Mussorgsky's Pictures at an Exhibition on the radio. I saw the concert on Monday, recorded by ABC Classic FM, and now hearing it on the radio I am aware that it sounds different without the visual effects. It is simply a different experience. Listening to non-live music is great, but it always makes me want to hear the actual live performance. Hearing a concert after seeing it live though is just a pleasure as you notice more about the audio experience that you might have missed on the evening.

Pictures at an Exhibition is a piece often played as a showpiece by virtuoso pianists as it is so difficult, not that you would have realised  that by watching Ohlsson's performance on Monday as he made it look easy.

As he finished however, one of my seat neighbours said to his companion, 'How does he do it?' 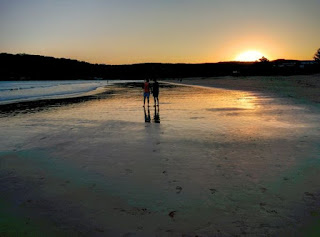 It's Valentines day - appropriate for this photo taken on the beach last night.

I wish many lovely sunsets to those exchanging red roses and to those who are not.
Posted by Elizabeth at 11:44 am No comments: Links to this post

I am on a roll, a fruit roll ... just like this time last year. There is something about summer fruit that is art-inspiring.

This painting is an add-on. I painted some peaches last year - and half a bowl. I liked the peaches but the painting always looked incomplete, so I added another canvas above, completed the bowl and added some pears and bottles.

Posted by Elizabeth at 5:15 pm No comments: Links to this post