'One ought, every day at least, to hear a little song, read a good poem, see a fine picture and, if it were possible, speak a few reasonable words.'
Johan Wolfgang von Goethe, Wilhelm Meister's Apprentice.

#acoplayersonthebridge
Posted by Elizabeth at 9:51 pm No comments: Links to this post

Email ThisBlogThis!Share to TwitterShare to FacebookShare to Pinterest
Labels: 2016, dreams

Let the joy of life be with you

Posted by Elizabeth at 7:29 am No comments: Links to this post 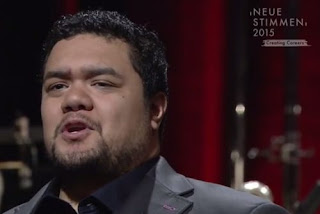 If, like me, you have overdosed on American jazzed up Christmas Carols, here is something to set the world to rights.

Posted by Elizabeth at 1:23 pm No comments: Links to this post


Posted by Elizabeth at 2:33 pm No comments: Links to this post

I am getting work ready for a January exhibition at the Gnostic Manor in Woy Woy, part of the Gnostic Corner, shops known for alternative style and products. The Gnostic Manor is a cafe with good coffee and four long walls which host exhibitions that change monthly. Since it is summer I am framing up sailboats and water views, but also a series of new works,  beach paintings that are partly watercolour and partly sewn.

It seems to be my month for exhibitions as I also have a set of smaller works up in the Yoga Center in Umina. They tell me they find them very peaceful and have asked to keep them up another month. Below is a card I made of one of them, a small sketch of sailboats on Sydney Harbour, paiinted from a harbour ferry. Posted by Elizabeth at 9:01 pm No comments: Links to this post 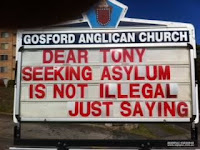 Today I went to a discussion hosted by the Anglican activist pastor, Father Rod Bower. If you follow Australian politics you might have seen one of his church signs questioning the wisdom of our elected politicians as they are regularly shared on social media.  With him were Julian Burnside QC, well known as a human rights advocate and thorn-in-the-side of successive asylum-seeker-mistreating Australian governments and Professor Patrick McGorry, psychiatrist and mental health advocate and the grandfather of Australia's wonderful 'headspace' program which helps teenagers with mental health issues.

The afternoon also included cross cultural music (Iranian/Australian) written for the event by Iranian violinist Salar Hs and Caitlin Yeo. (They got a standing ovation.)

The discussion was billed as being about the impact of past, present and future border protection policies on the well being of asylum seekers seeking protection in Australia. Australia has an abysmal record in dealing with asylum seekers and I would have thought it obvious that ill treatment would have a very negative effect on them but I went because I have wondered at the strength and tenacity of Julian Burnside for some time and was interested to see him in the flesh.

The church was overflowing. More chairs were brought in and still more, but there were still people standing. Despite it's activist pastor, Gosford as an area is not known for being particularly progressive and seeing the church so full of people wanting to hear about this difficult subject was heart warming. If there are so many concerned people here in the boonies, then there is perhaps hope yet for Australia.

McGorry spoke about mental health and told us about a woman he treated and continues to treat who was a refugee from past horrors in South America. She still needs periodic treatment 20 years later.

How the young men (and women and children) on Nauru and Manus are going to fare is hard to imagine. The worst of it is that the Government is torturing these people deliberately, as a sign to others  not to try to get to Australia.  McGorry said he had been in the UK recently for the world cup between NZ and Australia and was startled to discover that every one of the neutral observers he met were backing New Zealand. Such is international distaste for Australia nowadays. As several people said, our reputation is being trashed for a great deal of money and at the cost of people we should be protecting.


Julian Burnside, a man who has agitated for asylum seekers for years is an inspiring and passionate speaker. When people asked afterwards what one should do, he said "don't vote for either of the major parties".  (The Greens Party is the only major party with a humane asylum seeker policy.)

There was some discussion about whether Australia's unresolved issues with aboriginal people might be part of the problem. I am inclined to think it is a significant factor because if someone already has a scale for humans and ostracises one group it would surely be easier be easier to persuade them that another group is similarly unworthy.

I had thought that the discussion might have been an exercise in preaching to the converted but afterwards my seat neighbour turned to me and said with a horrified look on her face, "My eyes have been opened. I can hardly believe what I have heard."

It seems that this issue is one that will have to be won person by person because what it needs is a change of heart from that mythical silent majority we all hear about. The media is caught between a rock and a hard place as our government refuses to answer questions about asylum seekers, but perhaps a tipping point is being reached. (Burnside said he will be delighted to represent any doctor who breaks the most recent law past by the government which makes it illegal for doctors (or anyone else) to disclose abuse to children they may observe on Manus or Nauru.)

The discussion was filmed, I understand for the ABC TV Compass program, so hopefully many more Australians will hear the arguments of these inspiring people.

Posted by Elizabeth at 10:17 pm No comments: Links to this post

My neighbours across the road take their Christmas display seriously, touring America to see what is available and spending lots of time in planning. On 1st November they cover their fish pond, move some plants and start installing the lights then on 1 December comes the big 'turn on' celebration. Every evening thereafter they bring out the deck chairs and sit admiring their handiwork and chatting with the people who come to see the show. 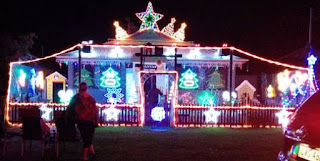 I used to be rather dismissive of such displays but I have seen all the people who bring their children for a look and now I view it as an example of a 'public good'. (See the Christmas trees sing in the video below)

Just lucky for me though that Christmas comes only once a year.

Pinchgut Opera - why the critics rave

Pinchgut Opera is an unlikely sort of name for a company that performs Baroque and early Classical operas but it sticks in your mind, especially when it keeps reappearing with rave reviews.  Yesterday was the first time I have seen them perform and now I know what all the fuss is about. They are just so refreshing!

As I watched them perform Grétry's L'amant Jaloux I couldn't help thinking that their performance must have been very similar to those in the Baroque period. It is a fascinating glimpse into that world, as well as begin a comical and ravishingly sung romp.

The opera is part spoken, but unusually (for me at least) that didn't detract at all from the performance. Perhaps it was because the parts were spoken so beautifully and so theatrically? Perhaps people who sing gloriously (and they all did) bring a special resonance to spoken parts?  I am not sure, but they were all so captivating that the spoken and sung parts melded seamlessly into a whole in the most wonderful way.

Pinchgut was established in 2002 and performed an opera a year until 2014 when they put on two operas. I  heard one of those two (Iphigenia) on the radio and had been so captivated that I decided I must find an opportunity to see them this year. Now I have seen them once, I shall definitely have to go again.

Posted by Elizabeth at 10:18 pm No comments: Links to this post

It's summer ... a great time to be six years old

I couldn't resist making a little movie of our girls in the garden.

A childhood idyll.
Posted by Elizabeth at 8:43 pm No comments: Links to this post

I am in Sydney on an impromptu babysitting mission.  Six year old Sophia and her friend Elisabetta have dressed up in their party clothes and are  having a picnic in the back yard.

Elisabetta lives in the house behind and they visit each other by slipping through the fence. They keep each other entertained which makes it very easy for the babysitter. Sophia's brother is hiding in his mums room playing computer and her much older sister has disappeared upstairs to dry her hair which she has just dyed black. 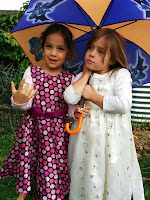 Sophia and Elisabetta have their umbrella up
"I felt a raindrop" I hear one of them say.
Then they rush inside to the bathroom. One is inside the bathroom and one outside. It is a seldom pleasure listening to the conversation of two six year olds.

Sophia (in the bathroom) has instructed Elisabetta to get paper and textas so they can communicate with each other by passing notes under the door. Both of them are in kindy and just learning to write.
"They're in the living room, you know, in that small drawer," comes the voice from the bathroom.
"Yes, I know!"
There is the sound of running back and forth along the passage as Elisabetta searches for textas that work.
(The babysitter thinks, this is better than the movies)
" Don't forget yellow" comes a voice from the bathroom.
"Oh I didn't hear. I'll go and get yellow."
Bang bang bang, the feet run down the passage again.
"I have the yellow!"
Pause.
"Are you nearly finished writing? "
"Yes"
Pause.
Elisabetta hums to herself.
"Are you done?"
"Very very very nearly."
Pause.
Humming.
"Are you done???"
"Very almost!"
"Very very almost?"
"Yes, very very almost!"
"Oh!"
Pause.
"Are you done?"
"Very very very very very very very very very almost"
"Hmmmm. "
Pause.
"I'm waiting!"
" The last number, umm no, ... the second last number in the universe almost!"
" I bet you are having some very hard work!"
Pause
" Now I'm the last number in the universe almost done!"
Hummm.
Then there is the noise of paper being shoved under door.
" Oh! That's what it looks like. Orange black and yellow!? "
" Its the cat!" 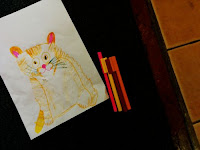 Then the bathroom door opens and there is a clattter of feet as they run outside again.
I sneak a look at the paper they left behind.
Yes, its the cat. Orange black and yellow.  And pink.
I pick it up and attach it to the fridge. 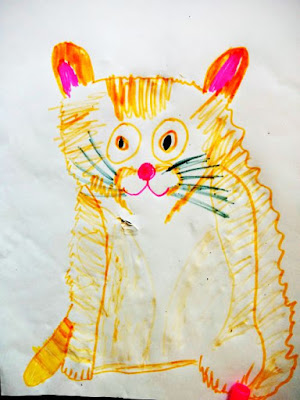 Posted by Elizabeth at 8:39 pm No comments: Links to this post