Baroque music. Somehow the name sounds so staid, as if the music might be constrained by tight corsets. Women did wear corsets in the 16th and 17th century but there was an exuberance in fashion at that time and if  the baroque concert I heard yesterday is any indication, that is what we should judge the music by.

Egarr is a pleasure of a man, explaining to his delighted audience what they should be listening for in the context of the time and teasing the orchestra by his unexpected improvisations which is, he said, exactly what baroque musicians would have done. (In Melbourne a mobile phone went off and Egarr reportedly improvised to include the mobile tune in his playing.) The Australian Chamber Orchestra, who accompanied him obviously enjoyed Egarrs theatrical flourishes and whimsical  improvisations.

Another great pleasure of the concert was hearing ACO Principal Violin Satu Vänskä play the solo lead in Bach's Concerto for Violin in A minor. She  has the most malleable right arm of any violinist I have seen. It flows in a mesmerisingly fluid dance as she plays. She reminded me of a weeping willow in the second movement, swaying and bending as she played. She was supported by the delicate and precise playing of her ACO colleagues and it made me feel like weeping.
Posted by Elizabeth at 1:07 pm No comments: Links to this post

After a major Wagner drought, all the antipodean Wagner riches came at once this year.  The wonderful NZSO Wagner Gala conducted by Pietari Inkinen and with soloists Christine Goerke and Simon O'Neill was sung in Wellington, Chistchurch and Auckland last week, the Auckland performance on Saturday coinciding with the first of two concert performances of Tristan and Isolde by the Sydney Symphony Orchestra.

Tristan and Isolde was the first live performance in Sydney of  a major Wagner work since 2003! We Wagnerians have been dying of Wagner-thirst.

The SSO played wonderfully well under David Robertson. The singers were placed behind the orchestra which could have been a problem in a hall with such dodgy acoustics, but they were voices of caliber and all of them could be heard clearly through the hall. At half time I was amused to hear a young actor/singer talking about the amplification of the singing and saying he could hear the singers well from the back of the hall.  He was astonished to be told that opera singers are not amplified.

The standout singers for me were John Relyea as King Marke and Katarina Karneus as Brangane. Both have voices worth traveling to hear. I hope they get another opportunity to sing Wagner in Sydney and that we don't have to wait another twelve years before we hear them again.

(Review of the SSO Tristan and Isolde)
(Review of the NZSO Wagner Gala)
Posted by Elizabeth at 6:17 pm No comments: Links to this post 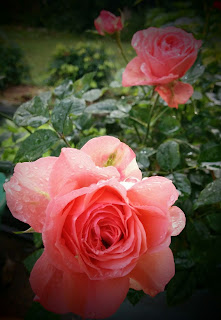 I was in Wellington only five days but hearing Christine Goerke and Simon O'Neill sing up a storm at the Wagner Gala was worth the trip across the Tasman.

Pouring rain greeted me on my return but my pet Valentines Day rose looks very happy despite the wet. It has produced another crop of flowers, the third since I bought it looking dry and sad. It is clearly very pleased with its new pot.  I didn't think roses thrived in Sydney's humid climate but they obviously do when it is cool and wet. I shall be interested to see when my lone rose decides it is time to hibernate and whether it survives our humid warm summer.

Posted by Elizabeth at 1:25 pm No comments: Links to this post

Hobbitland: down a Wellington hill

Perhaps it is no surprise that New Zealand became the home of the hobbits. The countryside is stunning but even the cities have a sense of wonder and mystery.

Take Wellington for example. If you wander down the Botanic gardens from the top of the cable car to the city you have the feeling of being in mystery-land.

At this time of year it is dank under the spreading trees and in one of the hill crevices which never seems to see the sun you discover a house with ferns growing on the roof. Surely hobbits live there?

Punga trees line the steep path down. Next to me on the path was a boy gripping an empty pram to prevent it careering down the path. As the path got steeper his slightly older brother came to help him hold the pram back. They were making for the playground in a clearing half way down.

Further down the hill the botanical gardens open out into a rose garden. The name, Lady Norwood Rose Garden, flips us from native pungas back into British colonial times. Perhaps the Lord of the Rings might sip tea there with Lady Norwood.


Past the rose gardens is a very tall plinth with a statue overlooking the city. SEDDON is written on the base in big letters.   Richard Seddon, 1845–1906, remains New Zealand's longest serving Prime Minster. He served thirteen years, which is something of a marathon in a country with three-year electoral cycles.

Past the Seddon plinth, the old Wellington cemetery with colonial tombstones marking the deaths of early settlers spills down the  steep hillside.

Wikipedia says Harry Holland was a New Zealand politician and unionist who devoted his life to helping people. It doesn't say why he is buried under a statue of a naked young man whose cute buttocks face the path down the hill.

I studied in Wellington in pre-hobbit times and remember fellow students going to read poetry in the cemetery at night. Perhaps they did it so they could boast about it next morning. If they had paused to read the tombstones they would have returned chastened as there are sad stories amongst them.

One stone commemorates five children of the Duff family:

The five Duff children all died of diphtheria within 12 days of each other in December 1876 to January 1877. Their father lived on until 1899 and their mother until 1912.

A motorway cuts through the bottom of the cemetery. A fellow walker told me she has a childhood memory of  gravestones stacked together at the side of the road  when the motorway was built.

Apparently when the site was excavated many more skeletons were found than had been expected. They were all  reburied in a mass grave near the church at the bottom of the hill.

You leave the cemetery at the bottom of the hill and suddenly you are in the city center not far from the famous beehive which houses the country's Parliament.

A few steps more and you are on the wharf overlooking the harbour. The day I was there the sun shone brilliantly on the white sailed yachts and hillsides beyond. Wellington is certainly picturesque.  I hope the Duff family had many such sunny days before they were so cruely parted.

Posted by Elizabeth at 3:16 pm No comments: Links to this post

Christine Goerke (Brunhilde) and Simon O'Neill (Siegfried) sang their hearts out at the Wagner Gala in Wellington on Friday. They were both stunning, as was the NZSO conducted by Pietari Inkinen, as they transported us through selections from Siegfried and Gotterdammerung.

This concert is definitely worth crossing the Tasman to hear. They perform in Christchurch and Auckland next week ....hear them if you can! (Interview with the singers)

Posted by Elizabeth at 11:02 am No comments: Links to this post 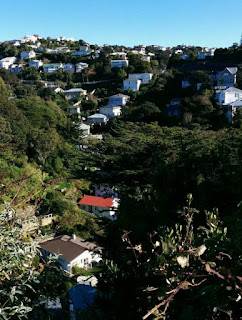 Wellington houses cascade down the hills like blocks dropped from a child's box. They gleam white in the sun, peeping between the power poles. 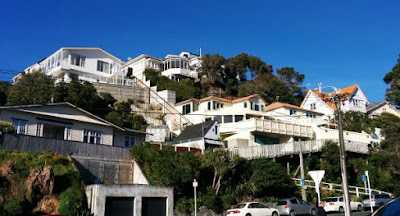 Posted by Elizabeth at 10:52 am No comments: Links to this post

Email ThisBlogThis!Share to TwitterShare to FacebookShare to Pinterest
Labels: Wellington

The Wellington Botanic Gardens climb up a gorge between two hills leading from  the city. The land was probably too inaccessible to be built on in the early days and still today some paths are very steep. It is a lovely spot on a sunny day, though dark and dank in the shade. The plants have gone into winter hibernation but last roses hang on. 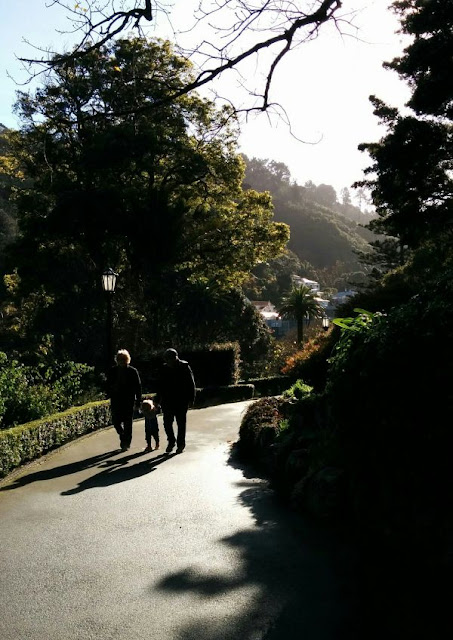 Posted by Elizabeth at 3:19 pm No comments: Links to this post

A random paper blowing down the street turned out to be the NZ Evening Post from 1977. 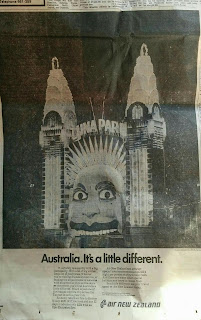 Posted by Elizabeth at 1:57 pm No comments: Links to this post 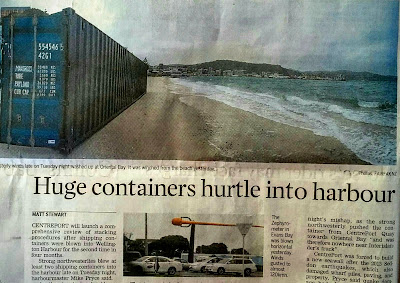 I watched the severe weather warnings from Wellington NZ with some trepidation earlier this week as I was due to fly across the Tasman on Wednesday. Gale force winds were predicted.

The cold front crossed Wellington on Tuesday night with such strong winds that shipping containers were blown into the harbour.

There was still a brisk wind on Wednesday but the biggest bump our flight experienced was a tire blowing out as we touched down. We had to be towed to the terminal but no one minded the delay at all.

Posted by Elizabeth at 2:03 pm No comments: Links to this post

Music and lights in Pearl Beach

The Pearl Beach Progress Association is quite a phenomenon. I don't know the average age of the members but whatever it is, they are proof that you don't have to slow down with age.  Among the events they organise is the June long-weekend Music Festival. Four mostly classical concerts over two days in their small community hall. There is always a taste of other music to cater for those less classically interested and this year it was Tango.

This year was also the first year with a new lighting system and the person operating the lights seemed quite captivated by all the different combinations he could produce. We had a very colourful show.

The Taming the Tango concert on Sunday night was the best attended concert and very well received, but my personal favorite was the first concert on Saturday afternoon: the Acacia Quartet playing a music by Elena Kats-Chernin, an Australian composer whose music I very much like.

I am delighted the Progress Association continue to bring serious classical musicians north for  evenings of intimate music in their lovely old hall. There is nothing that quite compares with hearing music in such surroundings.
Posted by Elizabeth at 8:19 pm No comments: Links to this post

The Australian Arts Minister George Brandis has taken $104m of the funding previously distributed by the arms-length Australia Council and moved it, without warning, to his own Department where he has the say on where it is spent. (Here is a thoughtful comment by the Music Trust)

In response the George Brandis Live Art Experience Facebook page has been established to which artists are posting images of paintings with Brandis photoshopped into them. In just 3 days it has become more popular than George Brandis' own page.

This is my contribution. I modified Zwei Halbakte (Two semi-nudes) by Otto Mueller who was declared a Degenerate Artist by the National Socialists in Germany in the 1930s. I tried uploading it without the yellow bar covering the breasts, but it disappeared almost immediately .... Facebook doesn't  like nipples (although presumably they don't mind male nipples).

The page is growing and I notice someone has just photoshopped Brandis into the famous Demi Moore photograph.

Posted by Elizabeth at 7:17 pm No comments: Links to this post