The blue porcelain duck looks down at me from the shelf and smiles. Quack!

I make cards from some paintings to sell at my local coffee shop (below). Originally I made cards with paintings of local places as they seemed to fill a gap.

Then I discovered that birthday cards were really what was wanted, so I added them to the collection. Of course they can be bought online as well.

Posted by Elizabeth at 7:45 am No comments:

A patient duck at the bus stop 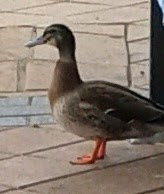 This duck was waiting patiently at the bus stop in Woy Woy yesterday.  She seemed to know that although the buses may not always be on time but they do come eventually.

Posted by Elizabeth at 2:55 am No comments:

My 'domestic items' painting spree continues, this time my mother's old eggbeater which I remember being used when I was a child.

Mother's passion was gardening, but she was also an excellent cook and her eggbeater got a lot of use, right to the day she died.I don't think she ever owned one of the more modern mixers.

I painted over an old picture of two life drawing models done at wonderful a Michael Taylor workshop held in Grafton nearly 10 years ago.

The eggbeater is an improvement on the original painting! The Hunter: cup and saucer (with books)

This cup and saucer was bought from an op shop ages ago. It has been on my 'discard' list for some time but it seems to survive all purges. It is English china made by MYOTT, with a blue and white pattern called The Hunter.

You discover when you attempt to make a ceramic cup how important handles are. This cup has an elongated handle and although you can't get your finger through it, you can balance the cup between your second and third fingers using the bottom of elongated handle.It might sound complicated but our hands do it naturally. Try holding some of your own cups and see what I mean. Happy Birthday, blue and white china with books by elizabethgw

Posted by Elizabeth at 2:49 pm No comments:

Email ThisBlogThis!Share to TwitterShare to FacebookShare to Pinterest
Labels: blue and white china, cup and saucer, MYOTT, painting, The Hunter

A month in the northern hemisphere has thrown my seasons instinct out of whack. Yesterday I saw these ducklings and part of my head was saying to itself 'ducklings in autumn?' Of course, here it is spring, as this brood attests.

Ducks are my favorite bird, but they are notoriously bad mothers. This one and her twelve little ducklings were splashing delightedly in a puddle on the side of the road. Lets  hope at least some of them survive the traffic and the cats.

Posted by Elizabeth at 3:40 pm No comments:

Sketches of the Gypsy Devils


The Gypsy Devils are a fantastic band who played with the Maribor Festival Orchestra at the Maribor Music Festival in Slovenia, September,2014. They played with verve and received an enthusiastic ovation. Sketches from the festival are online at the artsmitten gallery.

Posted by Elizabeth at 7:58 am No comments:

There is a lot of purple in the pattern on this old cup and saucer, but somehow I think of it as orange.

There is a chip on the saucer, but I love it anyway.  It was in my mother's cupboard and I think it once belonged to my grandmother who loved and collected old/antique ceramics; most of the pieces she collected were chipped or mended as she had a robust family of four.
Posted by Elizabeth at 8:20 pm No comments:

When you travel in the company of someone who doesn't paint, you tend not to paint very much yourself.   I did very little painting in Europe and arrived home with a need to paint that has resulted in small pictures of favorite things.

Here is my green cup and saucer.
Posted by Elizabeth at 10:39 am No comments:

When you travel from Australia to northern Europe the thing that impresses most is the greenness of your new environment. Green green green, rushing past the train windows, green when you look out your window, green everywhere ... apart from inner city Berlin where green becomes grey.


Posted by Elizabeth at 9:41 pm No comments:

One of the best things about being back in Australia is the coffee. We prefer a bitter brew here, real Italian coffee.  Germany prefers a smoother less bitter roast.

The cup and saucer in the picture are a favourite of mine. They were bought in Wanganui in about 2003 during a last trip there with my already very frail father.
Posted by Elizabeth at 11:43 am No comments:

Changi airport has very swish women's rest-rooms. Even if you are jet-lagged they are worth a photo. 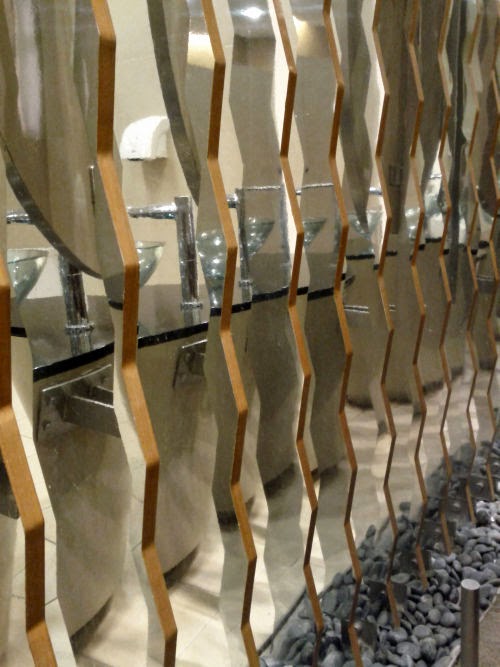 Posted by Elizabeth at 10:58 am No comments:

Our last stop in Europe was in Weisel, a small village 5 km from the Lorelei on the Rhine River. There is a slate pit in the gorge leading to the Rhine and many of the houses in Weisel have slate walls as well as roofs.  It is a neat and tidy place. The few shops hidden away in houses just have a small sign indicating that there is a bank, a hairdressing salon or a shop within. Last time I was here the bank was housed in a cow stall; now it has a more salubrious setting on the town square. All the houses are inhabited, but you would never know if you just walked through.

We were at the end of a history tour of Germany, a history of invasions and battles, often battles fought between invading armies on German soil. The old Germans fought the Romans here and the Swedes swept through as they fought Napolean, finally sending the Napoleonic army packing. My friend in Weisel tells me history that has marked the local community and that it is no wonder people barricade themselves in their homes and are wary of strangers.

If you are in the area Weisel is worth a visit - especially as there is a good restaurant hidden away here.  It is called Hannots and is housed in a quaint old building in Altpforter Street (picture) one of the main streets in the village. Hannots  is as welcoming as anyone could wish. The cook knows his trade and attracts people from surrounding areas. It makes a nice change from tourist restaurants on the Rhine. If you do visit, make sure you go upstairs to view the paintings of the Weisel and the Kauber Platte which hang on the upper floor.
Posted by Elizabeth at 9:04 am No comments: 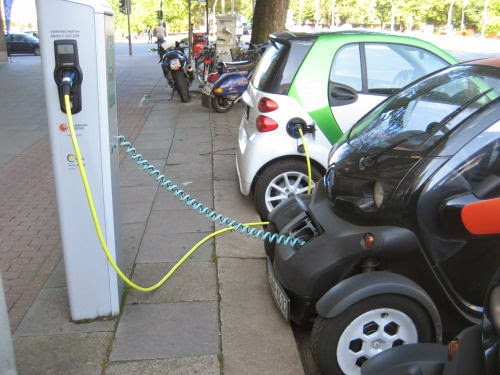 The way the 'bowsers' and plugs mimic petrol bowsers reminds me of the first cars which looked like horse drawn buggies. One day there will be small mounds in the pavement that a car automatically latches onto when parked. But perhaps by that time cars will just have been replaced by train-like modules that lock onto others once a destination has been chosen. 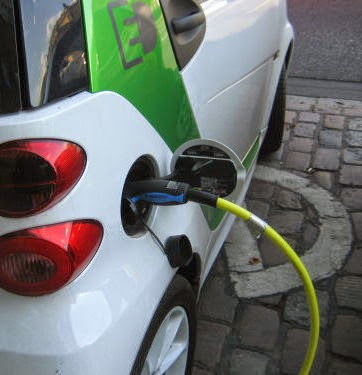 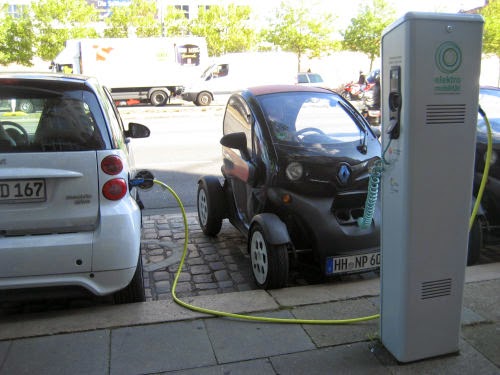 Posted by Elizabeth at 8:18 am No comments: