Hallelujah!  Just as well we have inspiring musicians to lift our spirits. 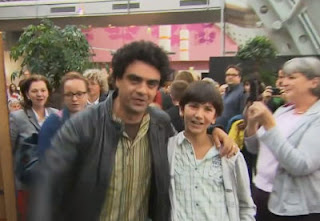 Posted by Elizabeth at 2:07 pm No comments: Links to this post

The Government report on the rollout (or lack of it) of the national broadband network (NBN) today  has provoked a stream of twitter comment:
“Heavier-than-air flying machines are impossible.” Lord Kelvin, British mathematician & physicist Royal Society, 1895
“There is no reason anyone would want a computer in their home.” Ken Olson of DEC, maker of mainframe computers, arguing against PCs in 1977
“X-rays will prove to be a hoax.” — Lord Kelvin, President of the Royal Society, 1883
“Television won’t last. It’s a flash in the pan." Mary Somerville, pioneer of radio educational broadcasts, 1948. 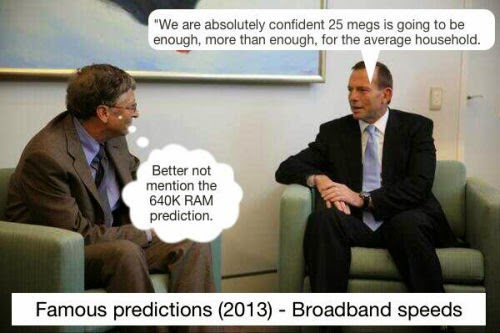 Posted by Elizabeth at 9:49 am No comments: Links to this post

Chickens on a bench

Welcome respite from the world's woes ... watching chickens bask in the sunshine. 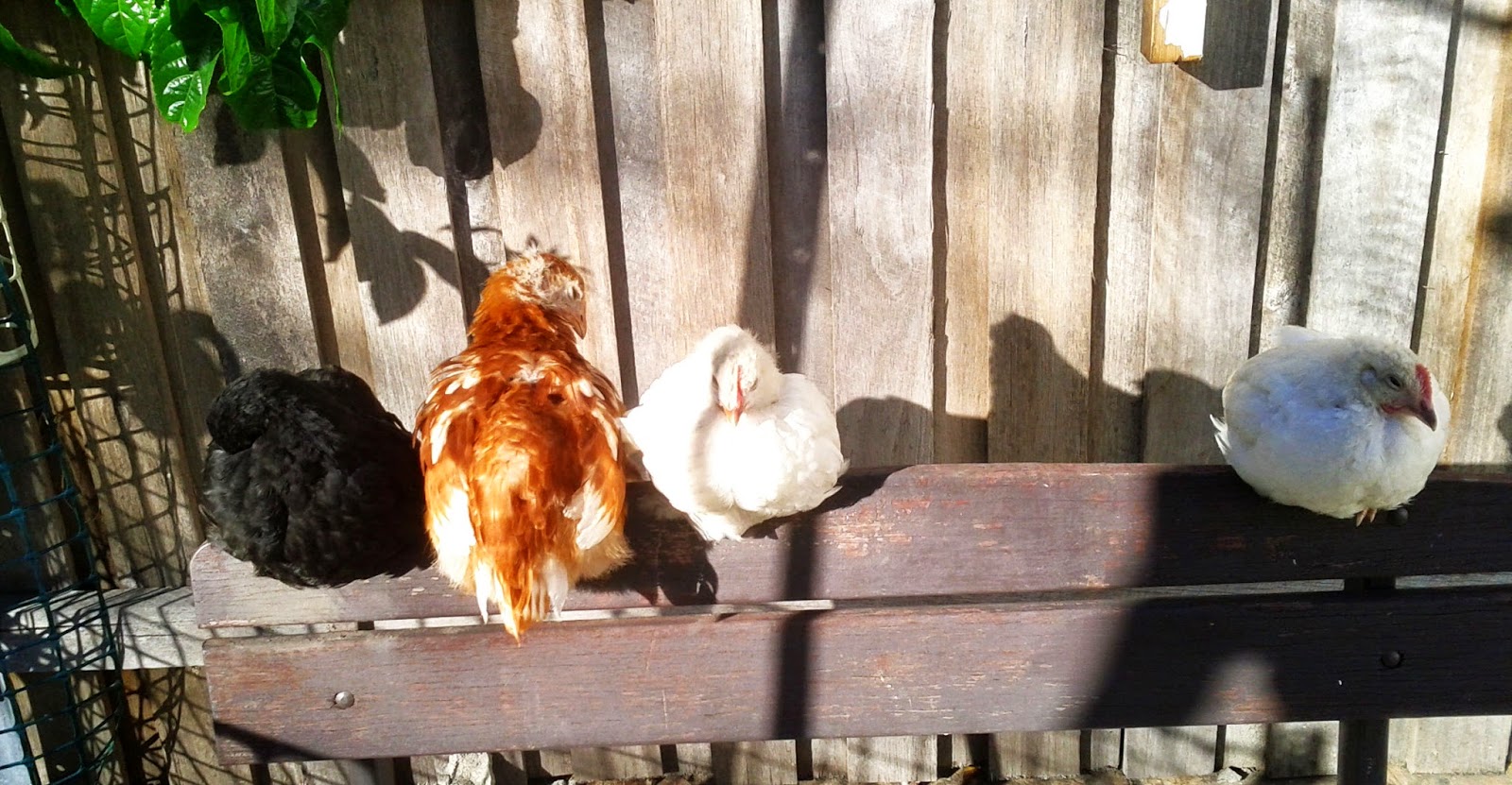 Posted by Elizabeth at 9:24 am No comments: Links to this post

We think we are civilised, or have have become civilised but how far have humans really progressed? My twitter feed this morning is full of images that make me wonder. Here's a sample:

Last week Murdoch's Australian newspaper (hemorrhaging money as we since found out, so only maintained to pedal influence) ran this divisive front page. In response a group of Christian and Jewish leaders have launched a campaign called We'll love Muslims for 100 years

Australians, stunned by the realisation that the liberal party has been taken over by its far right wing and become a tea party, are starting to respond. Someone has posted a picture of Nobel Prize economist Joseph Stiglitz telling us the the Abbott Government's plan to deregulate education is a crime.

NASA Global Climate change talks about the difficulty in reaching out to tell the climate story. You would think NASA had influence but they are up against the Murdoch empire (above). I do wonder what Murdoch's children think of his newspaper's stance - are they so very undereducated?

Then there is this stunning cover of the New Yorker responding to Ferguson. Hands up in surrender to a violent and destructive power.

Lastly and on a note of hope within disaster, from the UN Refugee Agency comes a picture of five babies born weeks after a Syrian mother fled her country.
Posted by Elizabeth at 9:19 am No comments: Links to this post

For those Australians who saw Jonas Kaufmann last week and need another little fix, try the link below. 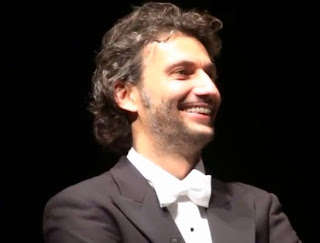 The thing I found most fascinating about his live performance was being able to see (or perhaps feel) how he adjusts his body in preparation for singing. It is as if he adjusts the strings of his internal cello, holds it all in place, inhabits the role, then breaths - and suddenly the air carries vibrations of such beauty you feel like weeping.

Quite extraordinary ... and perhaps ones own body mimics his, because it makes you feel as if you are part of the performance in some odd way.

Posted by Elizabeth at 5:39 pm No comments: Links to this post

Teachers have such power, though they may not think so themselves.

So many people have told me that they can't paint because their teacher told them long ago that they weren't any good. Many of these people harbour an unrequited wish to try again and when they do they often find hidden talent they never knew they had.

Others have told me they really couldn't draw at all when they started art classes, but perseverance has led them on a rewarding and fulfilling art journey. 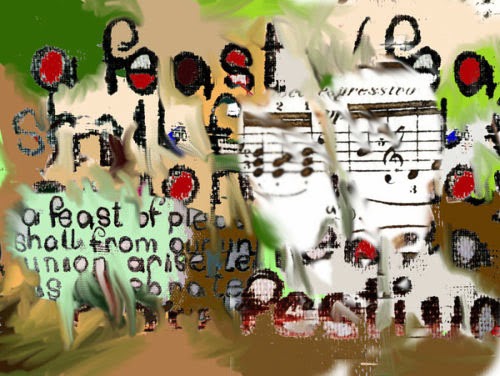 My doodle for today.

Posted by Elizabeth at 8:02 am No comments: Links to this post

Email ThisBlogThis!Share to TwitterShare to FacebookShare to Pinterest
Labels: 'feast of pleasure shall from our union arise', doodle, Tannhäuser 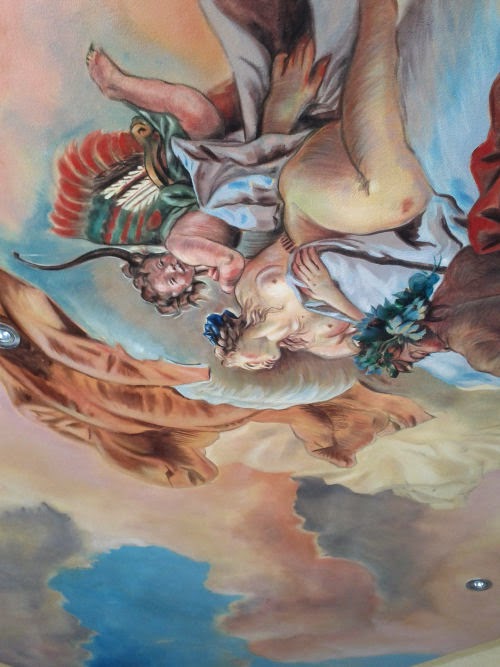 You look at the fresco on the ceiling; and the statues in the courtyard;

you look at the architecture of this two storey building complex and you pinch yourself and ask 'is this Monday and am I in Italy?'

But no, you are not in Italy but in a little bit of Italy on exactly the other side of the world.

Across the road from this ornate Italian edifice which houses a cinema as well as several restaurants and a weekend market, are small fibro and wooden dwellings, the type of dwellings that characterise Ettalong on the NSW Central Coast. Yes, you are in Ettalong, not in Italy.

Posted by Elizabeth at 12:18 pm No comments: Links to this post

Jonas Kaufmann is billed as the world's hottest tenor and he seems to have been smoldering at me from all my Internet feeds recently -  obviously the internet bots know my viewing preferences. I saw the man sing in the flesh last night and the reality is even better than the promos.

His voice is rich, velvety, extraordinarily flexible and fills even difficult spaces like the Sydney Opera House concert hall. The man is a consummate artist, much nicer than the posed photos.


There were almost audible gasps as Kaufmann started singing ('Recondita armonia' from Tosca) and after this first song my seat neighbour turned to me and said "Well even that one song was worth the (considerable) price of the ticket."

As Kaufmann sang I noticed a tenor sitting in front of me mouthing the words with an ecstatic look on his face. He obviously knew just how much  hard work and dedication goes into delivering such a result. I had met this tenor earlier in the year and he told me he had bought an opera subscription just so he could get a good seat to hear Kaufmann sing. I am sure he was not the only one.

Kaufmann inhabits each role he sings (he was singing arias from French and Italian operas and his characters inevitably die tragic deaths) but he was also refreshingly joyous as well.  Violinist and concert master Laura Hamilton played us a lovely 'Meditiation' from Jules Massenet's Thaïs and on his way to the stage afterwards Kaufmann plucked a rose from the huge vase to the side of the stage and presented it to her. [The displays of white flowers along stage front and in two big vases were so opulent I thought they must be fake ... but no, they were real.]

The Australian Opera and Ballet Orchestra was conducted by fellow German Jochen Rieder and I think this was the master stroke.  Rieder feels the songs just as Kaufmann does; he knows his singer and it showed.

Kaufmann sang three encores to a wildly clapping and stomping crowd at the opera house last night, two of them German popular songs.  I would love to hear him singing Wagner.  I might just have to follow him to wherever he sings Siegmund or German Lieder.

Addendum: excellent ABC interview with Jonas Kaufmann here .
Posted by Elizabeth at 9:33 am No comments: Links to this post

And I paint roses

More here
Posted by Elizabeth at 4:51 pm No comments: Links to this post 
I will be in Hamburg in September and I am looking through my sketches to find some to hang in the coffee shop to replace the ones that have hung there for two years. I found this etching of the Speicherstadt.  The Hamburg Speicherstadt is the area encompassing the old warehouses on the harbour. I spent time bicycling around the Speicherstadt in 2009 when I spent 9 months in Germany at Hamburg Art School.

While I was there, the high school where a friend taught had a teacher's gathering and they all danced Tango. They inspired this etching of tango dancers at the Speicherstadt.

Posted by Elizabeth at 3:07 pm No comments: Links to this post