This art and music blog is once again overtaken by politics. Current NSW twitter feed is astonishing and irresistible.
We are finding out through the ICAC (Independent Commission Against Corruption) just how corrupt NSW politicians on both sides of politics are. We heard about the dealings of Labour power broker Eddie Obeid and his colleagues in the last inquiry, and now we are hearing about equally devious and illegal practices in the Liberal Party.  A fourth Liberal MP has just stood down.

It turns out that mining companies (among others)  have been buying favours.

At the same time as ICAC is sitting citizens are protesting on the farms against the mining companies and trying to prevent them destroying farmland and forests. Over 120 people have been arrested at the Leard Forest site (see blogpost of April 3rd), among them local farmers, doctors and others who have come to support them.

Now police are preparing to break down the Bentley blockade which is a gathering to prevent Coal Seam Gas drilling on a farm in northern NSW.  It has been suggested that the police should arrest the current government instead. The blockade has wide local support, including a group of knitting Nanas from Armidale. They are knitting yellow ties.

The Federal Government is enmeshed in the corruption as well as the State Government. The Federal Assistant Treasurer Arthur Sinodinos has already had to stand aside and there is an increasing feeling that the stench goes right to the top. The Government is paying spies to track what the population is saying on social media and intimidate them. As I blogged previously, government employees are particularly in the firing line.

When you have corrupt governments licensing corrupting mining companies and citizens being arrested for trying to protect the land that the corrupt politicians have sold off, it is time to change how we are governed.

I read that an increasing number of people are dying trying to protect their land: Study Finds Global Surge in Murders of Environmental Activists.  It makes me wonder how far corporate criminals and the people in their pay are willing to go in Australia.

Posted by Elizabeth at 5:00 pm No comments: Links to this post

It is not easy being a mother, especially when your two  boisterous younger children are eternally in competition,  each demanding 150% of their mother's attention.

It is a gift to be able to keep smiling through the noise and demands, a gift I esteem very highly (not having inherited it myself). Greta has the gift, as you can see. Her lucky children are too small to know how rare it is, but one day they may look back, reflect and appreciate.

Posted by Elizabeth at 1:02 pm No comments: Links to this post

Lotus flowers symbolise many things, among them beauty, purity, clarity of heart and mind and, in relationships, love.


I was intending to place this couple on a big lotus flower, but that would have been out of character and a bit twee, so I placed them among lotus flowers instead.

I saw this display of lotus flowers in the wonderful Aboretum Ellerhoop-Thiensen, in Schleswig Holstein north of Hamburg several years ago. The lotus flowers were out when I visited and were a site to see. It is a wonderful place to visit, most definitely worth a detour.

On Easter Sunday the weather was perfect and I was at Circular Quay wharf before most of Sydney had woken up.

It is a short ride from there to  Cockatoo Island, formerly a convict prison, then a shipyard, and now hosting part of the Sydney Biennale artworks.

The island might look small on the map, but it is bigger than it appears with huge ship yard  buildings which provide perfect settings for large installation works. There are also various houses up the hill, formerly mess halls and staff quarters, with spaces for smaller works. It is quite a walk between the various buildings, up and down steep steps. Fortunately the coffee shops were open by the time I needed them,

The works I liked most were by European artists.

Christine Streuli had taken over the mess hall and as I wandered past her work, Wicked 2013 looking at the tattoo/graffiti inspired works that were partly painted on canvas and partly on the wall I started to wonder where her work began and ended.


Streuli is inspired by so many art forms, from 17th Century still life to wallpaper. I admired the faded pictures on the window panes and wondered how she had stuck them on so seamlessly.
I looked closely at the peeling paint on the lower wall, mindful not to touch anything, obeying the 'do not touch the artwork' notice in the middle of the room. I really could not tell where the art work began, so I asked the attendant seated by the door. 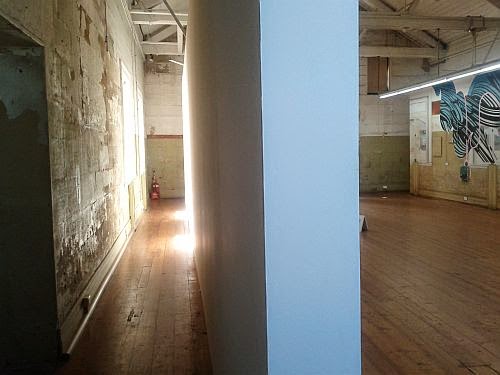 "Oh" she said, "I don't usually tell people when they walk in, but the whole thing is the art work. Have a look behind the wall - she has mirrored it exactly."

Streuli had had a false wall built into the room a meter from the original and the images on the wall reproduced those on the actual walls behind them, with the addition of the various art images.

It was very clever and made me smile.

The other work I thought outstanding was an installation in one of the giant shipyard buildings. It was called The Village, by Danish artists Randi and Katrina (Randi Joergenson and Katrina Malinovsky).

The Village is a series of quaint buildings, each one rather anthropomorphic. I paint portraits so I very often see faces where there are none, but these houses were definitely people-like, with two eyes, a nose and a mouth.

The houses looked so cute and so welcoming but all the doors were fake, even that into the church. There as no access into this charming world.  As the program notes say, 'This is particularly and unfortunately apt as we witness the perilous situation of those who seek asylum.'

At noon when the ferries were packed with visitors I was ready to leave. We motored along under the  bridge and around the corner to see the opera house glinting in the sunlight.


Sydney is a city of immigrants, many of them former asylum seekers, and when I saw the long lines of people waiting to board the ferry to Cockatoo Island, I thought 'Well, they will understand The Village, even if our Immigration Minister would prefer they didn't'.
Posted by Elizabeth at 5:38 pm No comments: Links to this post

This is a MUST WATCH!

Salut Salon, a quartet from Hamburg give a memorable performance of Vivaldi's Summer.

They call it Four in Competition.

F
Posted by Elizabeth at 8:06 pm No comments: Links to this post

Time for a little light relief. ...

I joined my local art group for a paint-out today but it had been so long since I had used my portable painting kit it was lacking essentials, like a water holder, borrowed for other projects. But I had a picnic cup with me and there was plenty of water in the inlet we were painting.

This is Point Clare on Brisbane Waters. As the tide receded, mangroves roots poked out of the mud and little flying insects joined the painters.

The foreshore is popular with walkers and today they included a long lost work colleague who told me he is undergoing chemotherapy. I was left looking out over the view and thinking how short our time is, each moment to be appreciated.
The previous sheet on my watercolour block had been painted last January in Waikanae, New Zealand. It is a view over toi toi plants in a garden overlooking the sea shore, painted from the top floor of a friend's house. The weather had been so inclement, with such strong winds that it had been almost impossible to paint outside.

Not that you would know from the painting.

Posted by Elizabeth at 1:53 pm No comments: Links to this post

Anyone who lived through the Stasi era in Germany would be getting goose bumps right now in Australia.  Newspapers today are reporting that the rules are being changed to encourage public servants to dob in mates who they think might be criticising Abbot Government on social media, even if it is in a personal sphere or anonymous. But isn't it a public servant's job to critique proposed policy and point out flaws before they are made law? These new rules would have the effect of making that impossible. (There are interesting comments after the article.)


So we can be bigots, but not criticise the government. Right.  I wonder when we will be required to get a haircut like that of our dear leader?

Posted by Elizabeth at 8:41 pm No comments: Links to this post

This art/music blog seems to have been captured by politics, but how can I resist when politics here has become high art (or high farce)? This week NSW Police are claiming intimidation by Twitter!

In Australia coal mining companies are using the tactics that oil companies have used for years in Africa. You can always find a corrupt politician to bribe and here in NSW they come from both sides of politics. Farmers are being left with no one left to defend their interests, so they are starting to take direct action themselves.

Whitehaven Coal, already involved in a high profile political corruption investigation, is forging ahead with their disputed Mauls Creek mine regardless of hundreds of submissions against this mine (I read that there were 300 submissions and only one wanted the mine to proceed). 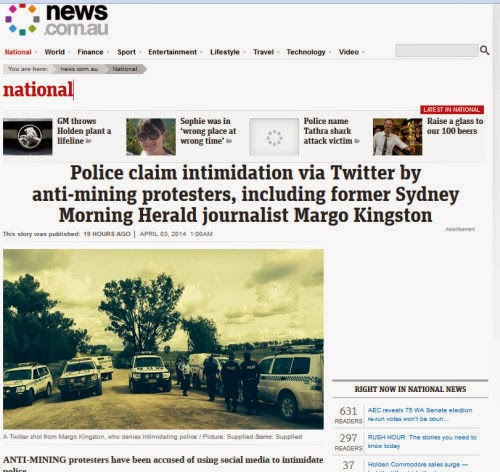 Protesters in NSW were inspired to action this week by the most recent IPCC climate change report and decided to have a picnic in the forest where the disputed Whitehaven Maul's Creek mine site is to be built. They were on their way when they were stopped by a police car blockade. (When did police start becoming the private army for coal mining companies?)

Police were photographed by activist journalist Margo Kingston blockading the road and she posted her photos on twitter. The next day NSW police claimed intimidation by twitter!

Later in the day eighty two protesters were arrested for trespass including Bill Ryan, 92 year old veteran of the kokoda trail. He said he was proud to be there among the cream of Australian society.

Here is a video made by the farmer organising actions against mining in the Leard State Forest in northern NSW.


And below is a video featuring Bill Ryan.

Posted by Elizabeth at 9:16 pm No comments: Links to this post

Sirs and Dames not legal?

Oh dear, perhaps conferring Imperial Honours on the outgoing and incoming Governor Generals in Australia was not legal?

The picture the Sydney Morning Herald used to illustrate this breaking news shows a laughing outgoing Governor General Quentin Bryce, which says it all really. There was talk that Prime Minister Abbott had shafted the popular and charming Bryce by nominating her as Dame (an honour she could not refuse without getting into a dog fight with Abbott)  because her son-in-law is current leader of the opposition and she herself is a republican. She accepted the honour but said she wouldn't use it. Now we find it may not be hers to use!


In the meantime, here is a little video that shows Australia's reaction to the Sirs and Dames issue.

Posted by Elizabeth at 2:36 pm No comments: Links to this post