The Australian Parliament dissolved into giggles last week when Australian parliamentary opposition members found they couldn't control their mirth about the 'Dames and Sirs' issue.

They were ejected from Parliament for laughing by the frowningly stern speaker Bronwyn Bishop (who is a member of the ruling Liberal party).


Not everywhere do politicians find laughter so objectionable. This video from the Swiss Parliament is delightful, even if you don't understand German.

In fact the politician in the pinstriped suit, Hans-Rudolf Merz, is talking about meat products. He found some of the bureaucratic language amusing and obviously his Parliamentary colleagues did too!

Posted by Elizabeth at 4:57 pm No comments: Links to this post

The French Cafe Patisserie La Renaissance has good coffee, French pastries and a charming back courtyard. It is also near the Museum of Contemporary Art which I visited on Friday to see the Sydney Biennale.  I had an hour to kill before the 10am opening time and I spent the time at La Renaissance, drinking coffee in their wet and  almost deserted courtyard. It was meditative and peaceful.


The item which stood out for me in the part of the Sydney Biennale housed at the MCA was Ten Liquid Incidents, by Roni Horn.

They were glass barrels that looked for all the world like glass tubs full of water but are solid glass and very fragile. Much as is our life on this planet right now.


Posted by Elizabeth at 10:33 am No comments: Links to this post

Dames and Sirs in Australia

Living in Australia is becoming more and more surreal. One day the Attorney General says he is changing the racial vilification laws because it is okay to be a bigot in Australia and the next day Prime Minister Tony Abbott tells us he is bringing back Imperial Honours.

I wonder if Abbott expected the mirth that has engulfed the twitter-sphere? He is being ridiculed as too clever by half. Some are saying our outgoing Governor General (was she too popular?) was made a Dame to put her in a bind because she came out as a republican and her son-in-law is Leader of the Opposition.

Current Government policy does all seem to be based on  pay back.  The racial vilification laws were changed because of the Andrew Bolt saga :

"Andrew Bolt was found to have committed an offence under section 18C of the Racial Discrimination Act. ...  Bolt had not breached the Act because he had written critically about the question of racial identification. He had breached the Act because his articles were filled with “errors of fact, distortions of the truth and inflammatory and provocative language”. (From The Monthly)

Now the interweb is alight with suggestions of who might be a dame or a sir and many have already preempted the honours list and added the title to their twitter-verse names.

Posted by Elizabeth at 5:06 pm No comments: Links to this post

The in-laws were going to be in the family portrait, but they didn't fit on the gap left on the sofa so I made a small painting just of them. I used acrylics on a very smooth canvas billed as 'good for any water based medium'. It was a hard taskmaster, slurping up the colour as soon as it was applied and drying before there was a chance to make any changes. Not unlike watercolour really.

So there they sit, these visitors to the antipodes, just about to go for their afternoon walk.
Posted by Elizabeth at 8:25 pm 1 comment: Links to this post

The conversation about artists and politics has been re-ignited by the boycott of Sydney Art Biennale by artists who felt compromised by the contract that sponsor Transfield Holdings holds providing detention center facilities in Papua New Guinea's Manus Island (where asylum seekers are sent, then held with no hope of having their asylum claims heard) and by subsequent comments by Australian Government politicians and others who seem to want artists to be seen and not heard.


But politics is life and art is about life so it is no wonder that art and politics are intertwined. Isaac Cordal comments on life/politics in a thoughtful manner. The photo shows a clever sculpture by Isaac Cordal exhibited in Berlin.  Waiting for climate change is another of his works, shown in Nantes last year.

The Sydney Biennale is now open and I think it is a 'must visit' year.
Posted by Elizabeth at 9:51 am No comments: Links to this post

'Not now, not ever': the choral music version

Posted by Elizabeth at 8:00 pm No comments: Links to this post


Constructed paintings take time and make you appreciate the talent of the masters. I have been working on this family portrait for some time, adding figures and changing them, starting in acrylic, finishing in oils. Now I think it is finished.

The Spanish baroque painter Diego Velázquez painted a lot of portraits but also had a talent for such constructed  paintings. My portrait is a nod to his painting Las Meninas ((below) which is a complicated work and a favorite of art scholars.  Somehow Las Meninas (The Maids) sticks in your memory once you have seen it. I had not consciously carried it with me, but when I thought of painting a family portrait, Las Meninas immediately came to mind.

So this is my Australian 21st century version, with elements of the 1950s and bright antipodean light.

Las Meninas has had whole books written on it through history and still today there is a running commentary, like this interesting piece in the Guardian newspaper. Just look at the size of the canvas that the artist is working on. It is about the size of Las Meninas which is 3 x 2.6 meters.

Other painters have also been fascinated by this Valázquez painting.

Pablo Picasso made a series of 58 paintings analysing Las Meninas which he donated to the museum in Barcelona.  Below is one of his versions, painted in 1957.

Posted by Elizabeth at 11:37 am No comments: Links to this post

The piano virtuoso Alexander Gavrylyuk gave a concert in Sydney last Saturday as part of the Sydney Symphony piano series which is held in Sydney's Angel Place, a hall with much better acoustics than the Sydney Opera House concert hall (which is why I bought a subscription to this series).
The pre-concert talk was given by pianist Stephanie McCallum. It was such a pleasure to hear the thoughts of a pianist on the program we were about to hear. Some of the excerpts she played were her own recording.

Alexander Gavrylyuk earned wild applause for his virtuosic performance, perhaps partly because we understood better what we were listening too?

Posted by Elizabeth at 9:20 am No comments: Links to this post

ALL. Try we life-long, we can never Straighten out life's tangled skein, Why should we, in vain endeavour, Guess and guess and guess again? LUIZ. Life's a pudding full of plums, DUCH. Care's a canker that benumbs. ALL. Life's a pudding full of plums, Care's a canker that benumbs. Wherefore waste our elocution On impossible solution? Life's a pleasant institution, Let us take it as it comes!

From The Gondoliers.
(Written on Facebook in response to a 'friend's request for answers.)

Posted by Elizabeth at 11:09 am No comments: Links to this post

Singing loudly all the time is neither good for your voice, nor for the listener. So says vocal critic Fred Plotkin in his article The pleasures of Soft Singing. 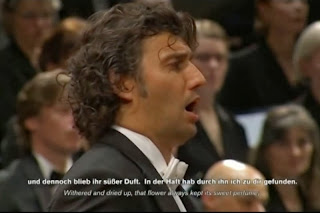 If you need an example of finely modulated singing, listen to Jonas Kaufmann's  'La fleur que tu m'avais jetée' from the opera Carmen.

Posted by Elizabeth at 7:45 pm No comments: Links to this post 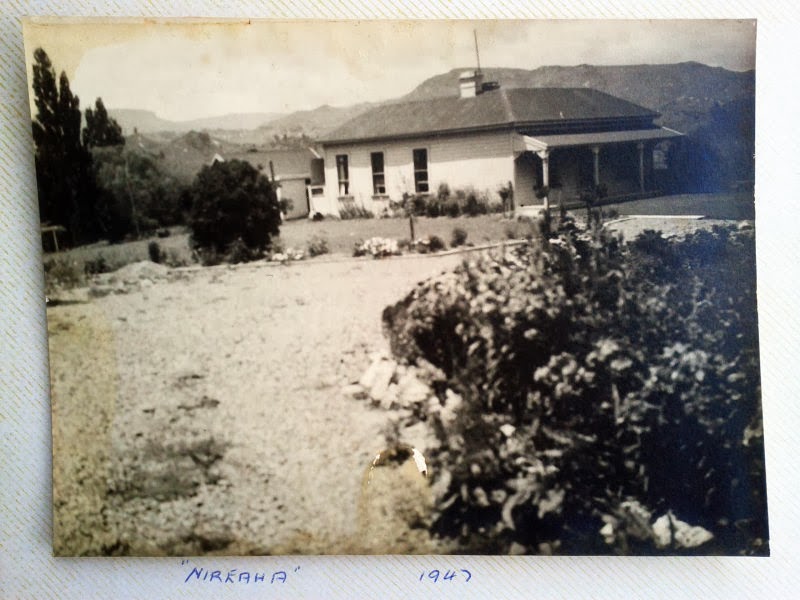 This is a photo of the house where I grew up, taken in 1947. It is in outback New Zealand, the center of the north island. By 1947 the hills had had most of the native bush removed (including wood the house was built from) but there was no electricity. I wonder what the aerial type rod attached to the chimney was for?

The house was a typical basic design:  passage down the middle, bedrooms to the right and living spaces to the left.  My parents added a sun porch where the long windows are and ten years later an extra wing at the front with lounge and a bedroom for my brother, who was the third born of their four children.

There was a family living in a house across the road and the next nearest neighbours were 4 miles further on. We were driven to the school bus stop four miles down the road then we traveled an hour on the bus to school every day. That is a long day for a small child and my report cards show I was absent quite often.
Posted by Elizabeth at 8:22 am No comments: Links to this post 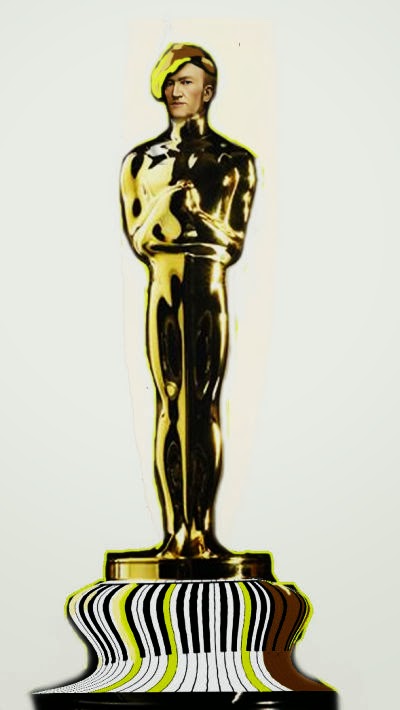 The Wagnerian website is giving out gongs for the "greatest  Ring Cycle of all time" and are looking for a suitable (virtual) award, so open up your photoshop and get creating. I stood him on a piano.

And while you create, listen to the Knappertsbusch' Götterdämmerung video below (thanks to The Wagnerian for the link).

Posted by Elizabeth at 9:37 am No comments: Links to this post

Pink sang Somewhere over the rainbow at the Oscar presentations. Some liked her, others would have liked Judy Garland back.

Well Pink is not Judy Garland but she can sing.  Listen to her sing Perfect in the video below.

One day they might invite a rapper to sing  ... maybe my favorite rapper Kate Tempest.

Posted by Elizabeth at 9:28 pm No comments: Links to this post

The extraordinary Serena Wang ... just nine years old with parents who are not musicians.  Listen to her play then read more about her here. 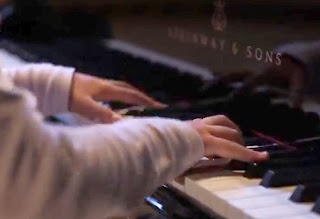 Posted by Elizabeth at 12:32 pm No comments: Links to this post