Summer idyll. A small boy sits splay-legged on a lawn among flowers, threading daisies into a chain. He is a picture of concentration. The year is about 1976 and the boy is Philip, sitting on a lawn in the grounds of a southern German castle.

I made the shirt and trousers (where did I get the time?) but I suspect my mother, who was visiting Germany for the first time, put the leaf in his buttonhole.

Posted by Elizabeth at 6:17 pm No comments:

The Dutchman Flies in Sydney

Huge sails soared to the ceiling of the Sydney Opera House concert hall on Saturday night. A sailing ship ... oh  yes ...  The Flying Dutchman no less.
The Sydney Symphony together with a cast of fantastic singers presented a wonderful concert performance of Richard Wagner's The Flying Dutchman. The orchestra, the soloists and the very large choir on both sides of the auditorium were exceptionally good. They got a wildly appreciative reception from the audience and a well deserved excellent review.  A video was projected onto the huge sails during the performance, which was successful in augmenting the music rather than distracting from it.

Last year Sydney Symphony put on a fantastic concert version of Tchaikovsky's The Queen of Spades and now, after this performance of The Flying Dutchman (there is another performance this evening), my bet is that the Sydney Symphony will be winning a lot of new subscribers, refugees from Opera Australia which is concentrating on balancing its books by putting on musicals.

Go Sydney Symphony!
Posted by Elizabeth at 8:39 am No comments:

Are you looking for a great place to live? A new survey has ranked Dunedin as the top place to live in New Zealand. Now why am I not surprised! After two weeks work the kitchen is finally finished, all except the painting.

The benchtop in the original kitchen was 45cm deep, the cupboards didn't close and it was hard to get anything from the back of them even though they were not very deep; the stove was well past its use-by date and the oven heated the house like a furnace. Apart from that it was quite usable - a 'functional kitchen' in real estate agent parlance.

The new kitchen .... well what can I say! It has handles and taps that give it a slightly retro look to match the age of the house, but is otherwise quite simple ... if you can call softly closing drawers and fancy pull-out corner cupboard simple.  Next week I will paint the gyp-rock wall and picture rail, then move the fridge to its new corner spot.

Posted by Elizabeth at 2:40 pm No comments: 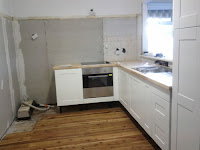 It's Saturday morning and the plumber is coming to put in the sink and tap. The cabinet maker is already at work adding filler to the gyp-rock walls that he put up. He tells me it is smoother than the glue/paste he used yesterday and will give a smooth finish but I will have to wait a few days before I paint it. It takes much more time than I had realised to gyp-rock a wall. Fortunately I painted above the new gyp-rock on Wednesday afternoon before the high cupboards were put up so I wont have to paint around them.
Posted by Elizabeth at 9:03 am No comments:

The kitchen might not look very different to yesterday but the stove and oven are in, the power is on and the bench tops are the right length.

Today was the electrician's day. He discovered that the electricity safety switch in the switch box was not working; it was wrongly wired.  He rewired it, removed a plug that was broken and could have electrocuted someone (!), replaced an old neon light with a normal one, discovered it had not been earthed so climbed into the ceiling space to earth it. I was pleased he had visited!
Posted by Elizabeth at 6:34 pm No comments: 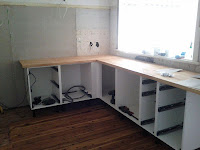 It is hard work this kitchen building process, even if you are not the one doing most of the work. But I have been lending a hand all day and am ready for a rest. The plumber arrived at 7:30, moved the pipe and disappeared. Soon afterwards the cabinet maker arrived and put up new plasterboard then we built the remaining base cabinets. They are now leveled and screwed together but not yet fixed to the wall. The worktop has been put on top to make sure it fits. Tomorrow the electrician comes ...

Posted by Elizabeth at 4:37 pm No comments:

Taking out the old kitchen 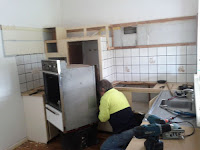 He is a pro, the fellow who is dismantling (and rebuilding) my kitchen.... I knew as soon as he put the long yellow spirit level on the bench.  Turns out he is a cabinet maker by trade so he knew exactly what he was dealing with.

He went about his business methodically, levering out the kitchen doors before knocking out the cupboard walls (they had no backs) then taking out the appliances.

These old kitchens were built with the house and it is not so easy to remove them. It took a bit over three hours until the cupboards/appliances/tiles were gone.

Kitchen is looking sad and sorry tonight but tomorrow is another day. The plumber moves the tap and the cabinet maker puts in some plasterboard walls. 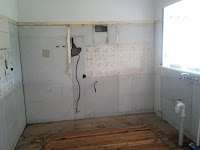 In the first week of April I bought an Ikea kitchen and prepaid installation. A first installer came in May and a second in early June. Last week Ikea rang and said (three months later and without the hint of an apology!) that the installer was too expensive and anyway they would not install as one of the walls has asbestos in it. I had heard that Ikea had had a lot of problems with installation after their kitchen sale (they no longer offer full installation) so I think the wall is a convenient excuse. The local kitchen company tells me every kitchen in this area has fibro walls and you just have to be careful not to disturb it.

So boo to Ikea. They don't hold to their contracts if it becomes inconvenient and I am less than impressed. My local kitchen company is going to do the job and removal is scheduled for tomorrow. Meanwhile ... I spent the weekend assembling Ikea  cupboards  and discovering how that soft-close drawer mechanism works. Pretty cool that!

Addendum: turns out I was right about my fibro wall being an excuse for Ikea. The Department of Fair Trading says that the firm subcontracting to Ikea didn't have a license to install kitchens (I had wondered why they seemed so amateurish) and have been told not to offer installation services. I had asked the Department of Fair Trading whether I was owed any compensation for the  extra costs involved for my installation. The answer was no, and I am fine with that... just happy to have a new kitchen.
Posted by Elizabeth at 12:10 pm No comments:

A thoughtful and discriminating child talks about his country:
Posted by Elizabeth at 10:33 am No comments:

Posted by Elizabeth at 9:41 am No comments:

A conductor with verve!
The gangnam version:


This is what he really conducted (Khachaurian--Spartacus):
Posted by Elizabeth at 7:44 am No comments:

Flowers are blooming all the way across the bush path over the hill. Most flowers in the Australian bush are small but the Banksia flowers stands out, shining in the morning light.


These photos were taken three weeks ago. Today after heavy rains the flowers are older, darker and duller.
Posted by Elizabeth at 9:45 am No comments: