Festival of the Vagina in Sydney

The 101 Vagina Exhibition was different to any other I have attended. People stood and gazed at the photos and read the stories, moving slowly from one to the next, totally absorbed.
(The book of photos and stories is is available online at www.101vagina.com )

I was fascinated to watch the crowd but not surprised at their concentration as the stories are all very readable. They are all so different-   honest, often poignant, sometimes funny, or sassy. 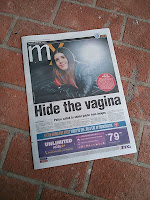 The Festival of the Vagina yesterday attracted a big crowd despite the pouring rain.

It had had some free publicity on Friday, featuring on the front of the MX paper. The report said two people had complained to the police and a curtain had to be hung over the windows. (Odd how no one listens when millions of people march and demand the government not go to war in Irak, but when two people complain about photos they are taken seriously.)

There were poetry readings, singing, a strip-tease show and a wandering nun to whom you could confess your sins.

The crowd was a happy one and out for fun.

One of the most popular activities seemed to be having your photograph taken in the 'vagina' photo booth (left).

The 'make your own 'vagina muffin' was popular too, as was the craft corner.  People pasted their creations on the wall when they were finished or put them on the display shelf.

Posted by Elizabeth at 7:44 pm No comments:

I have been in Sydney helping install the 101 vagina exhibition that opens this Thursday (27 June) at the 107 project space in Redfern (107 Redfern St). The Festival of the Vagina is on Saturday.

As we were working one of the artists who works in the complex walked through ... had a look... and another look ...and was soon lost in time. The thing with these stories is that once you start reading you can't stop. It's addictive! There are 101 stories so it can take some time!

Posted by Elizabeth at 3:14 pm No comments: 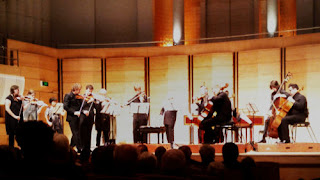 Today I heard the youth branch of the Australian Chamber Orchestra play, the young musicians who are being mentored by the ACO (particularly Helena Rathbone) and who perform throughout regional Australia. Their current tour is giving them exposure to metropolitan audiences. The twelve young musicians and their five ACO mentors acquitted themselves wonderfully well at Sydney's Angel Place concert hall.

(and cellist Daniel Mueller-Schott from Munich who played with them was a real treat!)
Posted by Elizabeth at 8:50 pm No comments:

Boycott Saatchi!
If you are an artist
Or if you are a customer
Such a sleaze
Doesn't deserve
Your custom
Posted by Elizabeth at 7:58 pm No comments:

More  on the exhibition here.
Posted by Elizabeth at 11:18 am No comments:

Here's something to bring joy to your heart.
Four members of he Philadelphia Orchestra play for passengers grounded on a plane in China.
Posted by Elizabeth at 11:31 am No comments:

Posted by Elizabeth at 11:32 am No comments:

After watching this I joined her twitter stream.
Posted by Elizabeth at 9:30 am No comments:

Floods in the German town of Magdeburg. Will this become the iconic global warming photo?

Posted by Elizabeth at 2:42 pm No comments:

Last night Simon Tedeschi and Kevin Hunt played two pianos at the fourth and last concert of the Pearl Beach Festival program. I didn't have high expectations; I was wondering what two pianos could do better than one and the program was a bit jazzy, not my favourite. But the concert was wonderful. It was almost all jazz apart from one Bach (which they also jazzed up but very sympathetically), very high energy and lots of fun. It was like being in a NY jazz den but without the smoke. As a result I was still bouncing around the house at midnight and I woke this morning at 6 still feeling energised.

The Pearl Beach Festival is a little oasis in the wilderness. It reminds me of the local concerts I've been to around Hamburg, held in small churches and even cow stalls (well, a historic cow stall actually). Small intimate space, great musicians, organisers who care.  Long may they continue.
Posted by Elizabeth at 7:58 am No comments:

I was pleased to read the Dunedin City Council decided not to try to turn Dunedin into the Gold Coast. They refused an application to build a huge and unimaginative glass box hotel on the waterfront which would have dwarfed the rest of the city.

The builders of these boxes offer glossy pictures and marvelous stories  of tourist bonanzas but the reality is different. Just consider the Mantra Complex in Ettalong Beach, an hour train ride north of the Sydney CBD.

Residents of Ettalong village didn't want a swank hotel in their neighbourhood but the Gosford City Council dreamt of glitz and riches and overruled them. They approved the Mantra Hotel and many investors believed the hype about it being an investors dream and bought an apartment in the complex. (It operates as a serviced hotel.)

Nowadays those investors tell a different story. They cannot get rid of their investment, no matter what price they put on it and I have heard people who live there feel trapped as they cannot sell. Just look online at the apartments for sale. In Sydney the majority of 2 bedroom apartments sell for between $450,000 and $800,000 while the 2 bedroom apartments at the Mantra are selling for less than $200,000. The other day I saw an ad for a nice apartment there for $135,000.

The Gosford City Council is unrepentant and recently approved a second complex at Ettalong. There is definitely something wrong with our local government system (infiltrated by developers no doubt) when such travesties are foisted on local people against their will.

Dunedin, be grateful you have a sensible council that listens to its people. (Perhaps the Stadium debacle has resulted in a more community centric council?)

Dunedin has such a glorious setting and offers so many heritage and environmental pleasures that would have been compromised by a huge ungainly box.

If someone wants to build a hotel, let them build something with dignity, but no higher than these University of Otago buildings that I used as part of my 'grid' project in first year of art school.
Posted by Elizabeth at 10:42 am 1 comment:

Dresden is a city I have long wanted to visit but never quite reached. In 2006 I was planning a visit but the city flooded, undoing much of the work of the just-completed and much vaunted city renovations.

Now the water is rising again and the Dresdner Semperoper is cancelling opera performances.  I shall have to plan my visit out of the rainy season as floods are predicted to get more frequent.
Posted by Elizabeth at 6:18 pm No comments:

Ever wondered why there are so many climate skeptics when 99% of climate scientists are warning us that we are causing climate change?

Posted by Elizabeth at 9:16 am No comments: