Painting at Wellington Airport while waiting for my flight.
Posted by Elizabeth at 4:22 pm No comments:

Sitting in the cafe in Taihape looking at my coffee, I can't help thinking that the townsfolk and the coffee are similar .... a bit brown a bit white and a bit mixed. I  grew up in a truly bi-cultural place and when I return I am reminded why being Pakeha is such a significant part of my identity even after so many years of living far way from this place.

Posted by Elizabeth at 6:22 am No comments:

My mother has a green thumb and is an avid gardener. The garden is her preferred mode of creative expression. When she was 84 she moved into a new house and set about making a garden out of the green-fields site. It flourished, as have all her gardens and it wasn't long before people stopped on their way past to take photos. Her previous gardens have been in out-of-the way country places and she rather enjoys this new found notoriety.These photos were taken this month, April 2013. 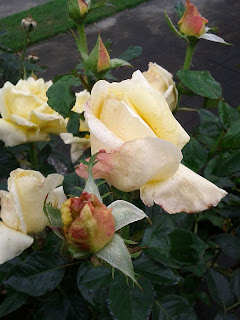 
The central plateau of New Zealand's North Island where I grew up is a spectacular landscape and when I return for a visit now I find myself continually reaching for my camera. I grew up on the road between Taihape and Napier and in hot summers we swam in the Rangitikei river,  a spot now popular with tourists for white water rafting.

This year when I visited the distant blue hills were augmented by early autumn colours. 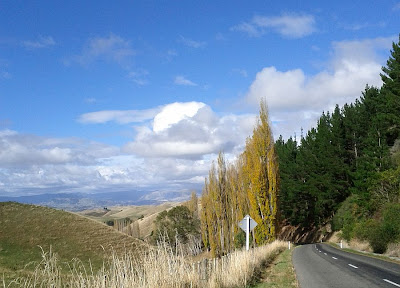 This little old church in a field to the north of Taihape led me to contemplate the life of our forefathers, those who settled this area in the 19th century.
When my parents settled in the area there was no power but in 1954 the farmers brought it in themselves. I remember Dad and our neighbours digging very deep holes on the clay ground outside the house for the power poles; perhaps one of my earliest memories.

Roads had been cut into the clay to allow farmers to settle the land and some of them, like the road below, continue to make work for the local council when heavy rain causes slips.


I missed the hills when I left home and I also missed the enormous cumulus clouds that so often drift overhead. Somehow clouds in other places are never quite the same.

Posted by Elizabeth at 6:46 pm No comments:

Bluebells in the Brown Sugar Cafe Posted by Elizabeth at 8:21 pm No comments:

Taihape has several cafes and they all make excellent coffee. One of them is the Soul Food Cafe in the middle of the main street. Their coffee is strong and dark and delicious!

Posted by Elizabeth at 9:32 am No comments:

New Zealand has been gripped by a drought, the worst in 70 years they say. There is no feed at all in the paddocks between Napier and Taihape.
The newspapers are saying that there may be more like this due to global warming and we should be prepared.
Posted by Elizabeth at 9:45 am No comments:

I was in Napier last week for Verdi's Requiem.
"Lovely building this", I said to the bank teller.
"Yes, we get a lot of Art Deco tours through to come and see it", she replied.

At the cafe on the marina there is a different sort of art deco.

Posted by Elizabeth at 9:30 am No comments:

Today Black Caviar (the horse) was racing at Randwick for perhaps the last time in its career. There has been so much hype about it that when I saw the woman in the big black and white hat on the early morning train I knew where she was going. She had a pretty black and white skirt, black heeled shoes that looked a little precarious, a small black clutch purse and the racing guide.
"Fancy needing only such a small purse for a day's outing", I thought with some admiration as I watched her take the seat next to mine.
When I next glanced her way I was startled to see she had taken a large hand full of pills from her small purse and was slowly and deliberately swallowing them one by one while sipping from a boxed chocolate drink. Each pill was a different colour - they looked like vitamin and mineral pills. It used to be said there would come a time when people would be able to live from pills alone, so perhaps that was breakfast.

Posted by Elizabeth at 9:38 pm No comments:

Faces are endlessly fascinating. These ones were made by dropping colour onto a canvas page and folding it in two. 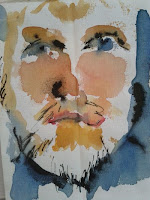 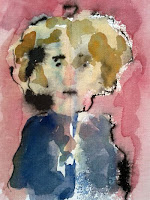 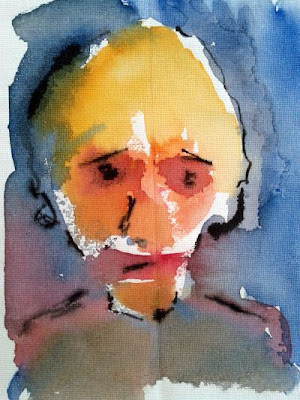 Posted by Elizabeth at 10:16 am No comments:

The mountains Ruapehu, Ngauruhoe and Tongariro are just north of Taihape where I grew up. Below is a watercolour of Mt Ruapehu, painted from Waiaruhe Road just south of Waiouru on Highway 1, or what we used to call 'the main trunk road'.  New Zealand high country countryside is stunning and I paint it every time I visit.
I'll be back in Taihape later this month, visiting my Mother who still lives there. Her place is almost opposite the tall blue Taihape town clock . Posted by Elizabeth at 7:03 am No comments:

My big oak table is very stable so it's an excellent work bench ... mainly used for framing pictures. I had to remove all the picture framing equipment last week though as the contents of the kitchen cupboards needed a home.

Posted by Elizabeth at 11:50 am No comments:

If you are selling furniture in a giant featureless warehouse, why not decorate it with fantastical fabrics to give it character? This is the IKEA pick-up area in Tempe where I waited for some time for my cash'n'carry kitchen.

My 50 year old kitchen is overdue for a revamp. There is nothing much worth saving - benchtops (45cm!) are falling apart, cupboards don't shut, stove is so old it is probably dangerous to use -  so the whole lot will have to be replaced.

It has taken me ages to bite the bullet but now IKEA has a kitchen sale with 20% discounts if you buy three appliances, so I have finally ordered a new kitchen.  I used the excellent online application that shows you what wont fit and what will but still had to visit the store twice to check things out.

The kitchen was delivered yesterday. Now it will sit in my studio for a month as they can't install until May. But I don't mind. I am looking forward to using a stove that works and having a range hood finally. That will be pure luxury.

Christopher Richardson, originally from Tasmania, sung at the Messiah at St Andrews last Friday. He has a wonderful powerful bass-baritone voice and it was worth going to the concert just to hear him.


I did a little sketch of him as he sang and couldn't help thinking how like he is to a friend I have drawn in Germany who co-incidentally shares the same (or almost) name.
Posted by Elizabeth at 8:27 pm No comments: