When the tourists leave town

I feel like the Venetians must in October when all the tourists leave.  Suddenly after the Australia Day long weekend my town is back to normal: you can turn right onto the main road, get a park outside the post office and skateboard along the side roads without being run over. 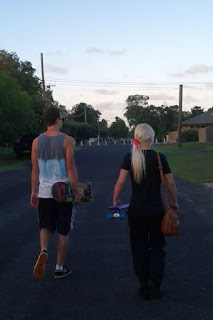 Posted by Elizabeth at 8:07 pm No comments:

The leaves of the poor little blueberry bush that I have been nurturing were burnt by the 46C heat last week ... and now we have a major rain storm.  Australia has always had extreme weather but it is getting even more erratic with global warming. The poor folks in southern Queensland are faced with flooded houses yet again, the second time in two years. One in a hundred year floods are becoming one in ten year floods, or one in two year floods.

Posted by Elizabeth at 8:24 pm No comments:

I just came back from a talk by Chris Masters about his new book Uncommon Soldier: The Story of the Making of Today's Diggers. He is an excellent speaker and his book looks very interesting as well. For anyone interested in understanding a bit more about the military I think this is a 'must read'.
I drew Chris Masters as he spoke and when she saw my picture, one of the women sitting at my table said, "Oh you should get him to sign it, I'm sure he would."
I smiled as I remembered the trouble that Helen Clark got herself into when she signed a picture for charity under similar circumstances. There was a big fuss because she had signed a picture she had not drawn herself. An easy mistake to make.
Posted by Elizabeth at 9:07 pm No comments:

Self portrait in dim light


Nowadays, even when I don't have a painting project underway I keep an empty canvas on my easel because I have learned that if the materials are at hand the paintings often arrive by themselves. This is one such painting. It drew itself on Monday evening and I finished it off yesterday. I didn't have much light as you can tell.

When you paint self portraits from a mirror, which is what I did, you get a mirror image which is opposite of how you look to others. Sort of amusing and it just shows that you that you never see yourself as others see you. The mirror was perched precariously on top of the canvas and it fell off as I painted ... so I had to finish the painting using the mirror shards.

I have just published Blue Tulips, an autobiographical book about love, music and art.  Love -  music - art,  what more could you possibly want? Wagner you say? Yes, well of course Wagner is in the book as well ... and happy 200th birthday to him!


Blue Tulips is online as a Kindle book at Amazon : http://www.amazon.com/dp/B00B1T64E0

You can download free Kindle software onto a PC or any other e-device to read Kindle books.


Posted by Elizabeth at 6:43 pm No comments:

The heat has passed, the damage is done. The vege garden cooked in the record 46C heat today. The  young fresh bean plants are now dried specimens. Everything suffered apart from the very heat resistant plants and even they look unhappy. Sage is normally pretty resistant but it curled its leaves.

I think it is time the rest of the population sued the climate skeptics who prevent drastic measures being taken to save the planet.

Holy moly ... we are being cooked alive.
I was in Sydney this morning ... it was searingly hot. It reached 46C by 2:30 although thankfully I was nearly home by that time. As the (thankfully air-conditioned)  train traveled very slowly along the Hawkesbury River I wondered if the heat was causing problems and crossed my fingers, hoping there wouldn't be a problem that would trap us in a hot train for hours. Looks like I was one of the lucky ones.

From the Sydney Morning Herald:
"Transport problems
The record heat across the city triggered multiple failures on Sydney's train system as steel wires buckled and a hose used to run a key signalling system melted.
There have been at least three equipment failures on the CityRail network on Thursday afternoon, triggering widespread delays across the city as train commuters swelter in air-conditioned and non-airconditioned carriages.
At Dora Creek, on the Central Coast, the heat caused an overhead wire to buckle onto a train at about 1.30pm. About 250 passengers were trapped on the train for about half an hour, until CityRail could organise another service for them to switch to."

Now I am back home and it feels like  ....  like an oven. Everything is hot. The floorboards are hot underfoot, the window panes (even in the shade) are very hot to touch.  Luckily I left the shades down and the curtains drawn at home and it was only (!) 37 inside when I arrived back.


Posted by Elizabeth at 3:33 pm No comments:

This Sophia, painted last Saturday. Sophia is three years old (and a bit) and as you can see from the painting she has a determined streak.

Posted by Elizabeth at 8:31 pm No comments:

Is it the heat? Suddenly lots of insects have appeared on the back lawn. They look like black-mushroom type growths from afar but up close you see lots of black winged insects have climbed up the grass leaves. They are all over the vegetable garden as well. What are they I wonder?

The New Year has arrived with fuss and fireworks. A happy 2013 to you!

During my New Year tidy-up I found this sketch of an art school tutor I drew in Dunedin in 2008. I must have thought that this fellow was a bit ageist to produce a drawing such as this ... or was it just the bit of emerging gray in his hair that conjured up this image? I was a mature age student in Dunedin and was not alone. But in Hamburg I was the only mature age student in the class and the staff were a bit flummoxed to have me there.

Brisbane Waters is nowhere near Brisbane but at my back door, on the Central Coast just north of Sydney in New South Wales.
We have a new local council and one of their ideas is to re-name Brisbane Waters to something less confusing. Big Blue Puddle perhaps, or the Aboriginal equivalent?
Posted by Elizabeth at 7:08 pm No comments: