Christmas is over? Time to go home?

Posted by Elizabeth at 11:13 pm No comments:

Email ThisBlogThis!Share to TwitterShare to FacebookShare to Pinterest
Labels: Christmas over chicken 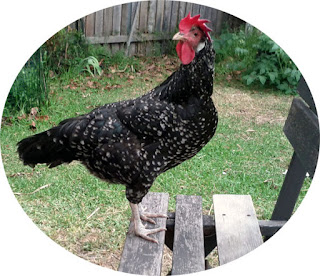 Posted by Elizabeth at 9:34 am No comments:

When I was growing up teasing was seen as a way to toughen up children to prepare them for life. It was only later when I was living in Europe did I realise that teasing was not universal and that societies without teasing produced more secure citizens. When you think about it rationally humiliating children is bound to have deleterious effects.

Prank calls seem to be most prevalent in societies where teasing is rife, societies which also have the biggest problem with bullying. Australia is trying to deal with bullying in schools but I think the tragic results of the recent 'prank' call shows that we need to tackle the issue on a whole-of-society basis.
Posted by Elizabeth at 11:56 am No comments:

When I was in Slovenia in September the economic downturn was biting and an art dealer told me that everyone would prefer to live in Australia. I looked around at the Slovenians sitting in the relaxed but arty coffee shops or wandering along the picturesque streets and was at a loss to explain that it wasn't all roses in Australia. Now the so called Kate Middleton 'prank-call' has provided the explanation for me.

Several years ago a barista making my coffee in Sydney's Hyde Park told me he used to work at Sydney Airport. I told him how much I liked the coffee at the Italian coffee shop there and he said “It used to be good I know but it has changed. All the shops have been bought by Canberra politicians."

Sydney Airport became a place everyone wished they could avoid. Passengers were (and still are) forced to walk for miles around cosmetic/alcohol counters before boarding their flights, stale food (I have friends who have become very sick after eating it) is served by harried and obviously low-paid worker and short term parking areas for those picking up incoming passengers was abolished and replaced by threatening men in fluro-jackets who forced everyone into astronomically priced parking stations. It became the worst possible welcome to Australia for overseas guests and Sydneysiders were very unimpressed.

Now Moore-Wilton is in the news again as Chair of Austereo which owns 2Day FM, the Sydney radio station that played that so-called "prank" that has caused the death of a British nurse. 2Day FM management vetted and approved the 'prank' call. Local radio shock-jocks, the type of people who put out mis-information (many are climate-change-deniers) and encourage others in their prejudices, are not only tolerated here but are popular and have been able to push the boundaries of good-taste with impunity.

There are a lot of Australians who are embarrassed and now appalled at their behaviour. When I voted in a Sydney newspaper's poll about the 'prank' (before the nurse's death) I was one of 61% who said they thought the hoax was silly and juvenile.  This large swath of the population who finds such 'humour' distasteful has been disenfranchised.  You are regarded as a poor sport if you complain and are bullied into silence. (Try ringing up one of the shock jocks to put a reasoned point of view and you will see what I mean.) Let's hope this changes but I am not very hopeful. Commentaries in the newspapers find the death tragic but are being very quick to point the finger at everyone but themselves ... the hospital ... the British Press ... etc etc.  The chip on the shoulder mentality is alive and well.

Posted by Elizabeth at 2:25 pm No comments:

Yesterday was very windy but by midnight when the host of a Christmas party I attended took his guests onto the rooftop of his apartment building to look at the view the wind had died down. The evening was balmy, the view spectacular and we remaining guests lounged along the railing watching the lights of a huge ocean liner as it moved along the harbour. 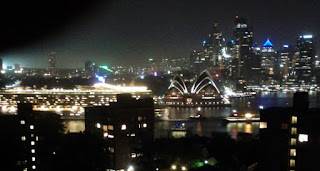 Posted by Elizabeth at 1:45 pm No comments:

My laptop died. It was bought in 2007 so some people would say it was old .... but not me. In the interim I have been using my travel EeePC. You can do a whole lot on these little machines, but they do have their limits.

Last week I got a new laptop a Dell Inspiron 17R Special Edition that reviews said has whizz bang insides in its rather old fashioned exterior. Certainly it is enormous and you wouldn't want to carry it far. It is also fast ... and hopefully can deal with video editing software reasonable well. We shall see.

Posted by Elizabeth at 12:16 pm No comments:

I made a card from a recent painting of the Brisbane Waters. Not that anyone buys cards any more because postage has become so exorbitant it makes you think twice about sending cards. Perhaps I should figure out how to make my own e-cards. Now there's an idea. 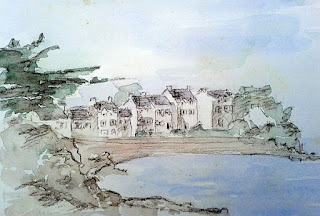 I have just found a couple of little sketches I made in 1981 in Port Navalo in France. We spent a very happy family holiday there. 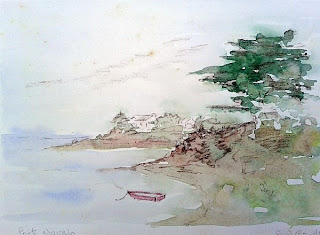 Posted by Elizabeth at 1:26 pm No comments: