I bought a book the other day published in mcmxlvii

Seagulls brace against the wind

'Blow away the cobwebs,' I thought. 'Walk on the beach!'
It was 4:30 in the afternoon, the sun had already disappeared over the hill to the west and the wind made even the seagulls look cold. My walk was a short one.
Posted by Elizabeth at 5:31 pm No comments:

A thought posted yesterday by the Dalai Lama:
Every morning when I wake up, I dedicate myself to helping others to find peace of mind. Then, when I meet people, I think of them as long term friends; I don't regard others as strangers.  Dalai Lama

Don't be afraid of death so much as an inadequate life.
Die Mutter (1930)
Posted by Elizabeth at 9:04 am No comments:

She has her wings spread but her feet planted firmly on the floor
Watchful, waiting to play a fairy trick
And burst into delighted giggles.
Sophia Angylion, special fairy.
Posted by Elizabeth at 10:02 am No comments:

People often sit in the train from Sydney with their baggage beside them instead of on the floor. As the train fills up the bags get shifted, as mine did yesterday when an elderly fellow sat down beside me. He looked (and smelled) like a street person and as soon as the train started he began to talk. The young girls across the aisle glanced over at me with commiserating looks but we had not gone very far before I discovered my companion was both intelligent and companionable.
My companion talked about his two wives, his life as a country rep, his four daughters. I even learned the part numbers of various car components.  He would be good at winning quiz games I told him and he said that he sometimes gets up to a million dollars on Who wants to be a Millionaire "But they can't hear me even when I yell at the television!"
Now and again he said, "I have to talk to keep myself awake you know and when we get to Woy Woy I will stand in the gangway so I don't miss the Gosford stop."
I eventually asked him how old he was.
He said, "I am a 1930 model" then looked me square in the eye and guessed exactly the year I was born.
I was surprised and he said "Oh I am never out by more than a year!"
He said he volunteered at the local op shop. He didn't say he was lonely, but I could feel it and I asked when his second wife had died.
"Three years ago," he said softly and sadly. "I really loved my second wife."
Then he said "You know I need to get a co-habitor again don't I? I like talking to someone intelligent. I hate being bored"
"Oh nowadays you don't need to cohabit," I responded. "You can live in different places and still be companions."
""Oh no," he said. "I don't like sleeping in a cold bed."
The trip seemed short and we were soon at Woy Woy station. I stood to get out and he stood to wait in the gangway, backing into a corner in a shy sort of way. I nodded my goodbyes.
I doubt I shall never see him again, but I think I will remember him for a long time. It takes courage to live on.
Posted by Elizabeth at 9:25 pm 1 comment:

The sea turns quickly. On Sunday the sea was flat calm but 24 hours later there was a raging surf. At Avoca huge waves were breaking in the rocks and salt spray obscured the view.

Posted by Elizabeth at 9:41 am No comments:

Short days on the Hawkesbury

The days are getting short and mid afternoon feels more like evening on cloudy days. This photo was taken about 3pm from the railway bridge over the Hawkesbury River about a week ago.

At 5:15pm today I tried to snap a picture in the same spot .... but it was too dark and all I got was the reflection in the window.

Posted by Elizabeth at 7:46 pm No comments:

This is Matt. He wrote the play 'Boo' that is on until 14 May at the King Street Theatre. I saw it last week and it is fun. Go along if you are in Sydney - its worth seeing! 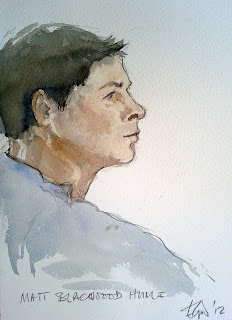 Posted by Elizabeth at 2:38 pm No comments:

As I sat there painting he talked and she listened. He talked and talked. She listened and occassionally made a suggestion or asked a question. 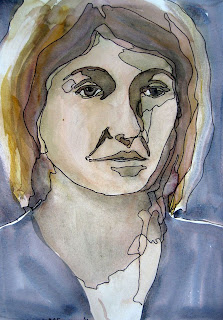 I hoped he had sorted out his issue. She seemed like a nice friend to have in times of need.
Posted by Elizabeth at 8:59 pm No comments:

In front of the old government buildings in Wellington, New Zealand, there are some magnificent Rata trees with the most stunning flowers. They look so healthy, every leaf perfect. They are a credit to the gardeners.
This photo was taken in February, 2012. In July I will be in Wellington again and I will have a look to see how this tree looks in winter.
Posted by Elizabeth at 8:01 pm No comments:

The Umina watercolour class has been fun. We had our last session this week and now there will be a gap until spring when the days are longer and 7pm doesn't feel like the middle of the night.
.

Posted by Elizabeth at 8:11 pm No comments: