Taking a break from boxes

The pile of boxes is growing smaller. Shelves and drawers have been rearranged several times as each new box is opened. All the stuff that should have been disgarded before moving is going into the St Vinnies box. The furniture is moving around too, finding its sweet spot.The boxes and boxes of art supplies, frames and completed work have not found their place yet. It will take a while

Tomorrow I take a break and go back to art class. I have a late night session. This photo below was taken recently on the way home from class. 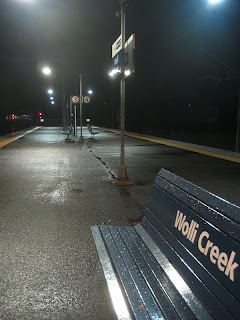 Posted by Elizabeth at 8:19 pm No comments: Links to this post

and out hops a kiwi. 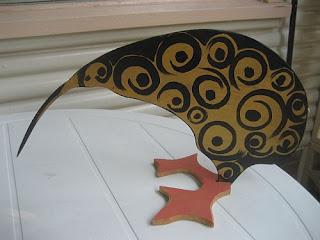 In our first year sculpture class at Dunedin Art School we had to learn to use lathes and electric saws without cutting off our fingers and this little kiwi was the result. A friendly fellow don't you think?
Posted by Elizabeth at 8:06 pm No comments: Links to this post

Its here! My furniture has arrived from Dunedin without major mishap. After three and a half months of living with minimal stuff, the house is now overflowing with boxes. 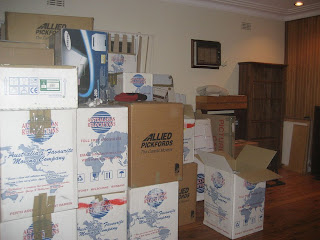 Tonight I have a comfy and warm bed. What bliss.
Posted by Elizabeth at 7:44 pm No comments: Links to this post

Life brings nice surprises. In 2009 I drew a musician playing an unusual instrument in the streets of the village of Rissen in Hamburg. A little crowd gathered and the musician stopped to tell us his instrument was a Bandura and that he was playing in the village to say thank you to the local people for enabling his stay in Germany. His name was Roman Antonyuk. 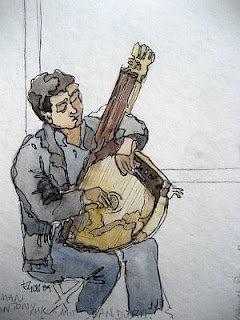 Today I heard from Roman and it turns out he not only plays but sings. He sent me a pair of YouTube videos. Here is is singing a Mozart aria:

If I had known he could sing as well as play when I saw him in Rissen I would have requested an aria.
Posted by Elizabeth at 8:39 am 1 comment: Links to this post

If you see The String Contingent advertised, go and have a listen as they are worth the effort. I saw them (a trio of Double Bass, Guitar and Violin) in Woy Woy a couple of weeks ago and was captivated by their music.

Now I have made a little video using a piece of music they composed and played.

Posted by Elizabeth at 5:02 pm No comments: Links to this post

Email ThisBlogThis!Share to TwitterShare to FacebookShare to Pinterest
Labels: The String Contingent 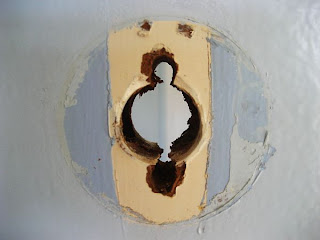 The door. Once it was cream, then dark blue, then pale blue.  (Now it is white)
Posted by Elizabeth at 6:09 pm No comments: Links to this post