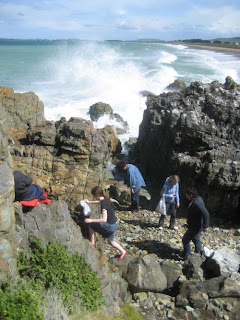 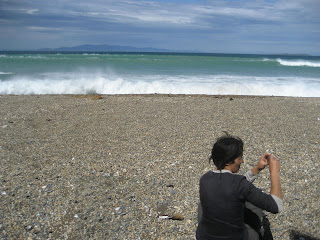 The beach at Colac Bay with tutor Johanna taking pictures. Across the water is Stewart Island.
Posted by Elizabeth at 6:18 pm No comments: Links to this post

I was astonished to hear from a lecturer at art school that he found my video confronting. He is so used to semi-clad female forms dancing in time to techno music that he found the images in my video discomforting, singing mouths which panned back to show that the mouths belonged to small children. He thought it might be a very clever comment on the issue of sexualisation of children.

Today I read in Sydney Morning Herald that the Bill Henson photos have lead to a push to disallow artist's privilege for imagery of children which is pornographic. Writer David Marr says the problem with that is the "widespread notion that has been growing over the past decade that just about any image of a child naked or scantily or precociously dressed is pornographic." I suppose that if, like my lecturer, you associate techno music with scantily clad females, you could argue that my film is questionable.

The issue is not an easy one. There is a very interesting article on the art life that discusses Henson's early photos and the art world's reaction to them. In my view these early photos are not the work of a disinterested observer and that makes me queasy about the rest of his work.
Posted by Elizabeth at 11:17 am No comments: Links to this post 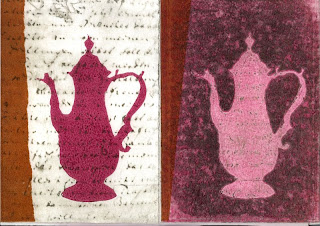 It took me a long time to warm to printing, but finally when I started experimenting with colour I got the bug. Our print course is finished and we had a free day today, but I spent the day (8.30 to 6pm)rolling the printing presses. These 2 etching/aquatint/stencils of coffee pots were the beginning of my colour experiments. Today's work sits under the presses at school. I shall be interested to have a look at it tomorrow when I have recovered from my marathon print day.
Posted by Elizabeth at 4:47 pm No comments: Links to this post

Our 5 self portraits are due to be handed in tomorrow. I am not sure they are getting any more like with time. 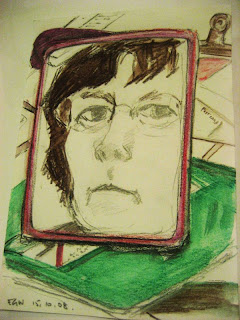 Self, in the style of Elizabeth Peyton. Little mirror is balancing on the clutter on my desk. 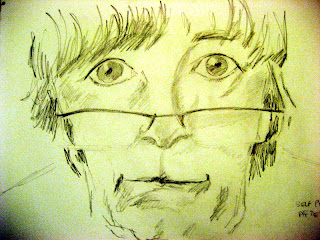 Self in the style of John Graham 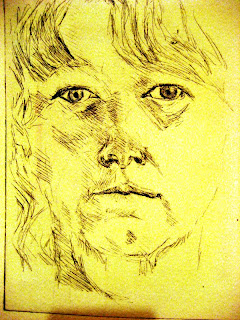 Self as an etching.
Posted by Elizabeth at 8:03 pm No comments: Links to this post

Stop the Stadium (in Stained Glass) 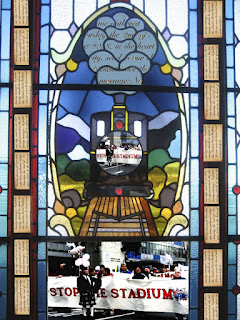 The stained glass window in the Dunedin Railway Station is one of the heritage objects in the city I like best. Dunedin is full of heritage gems but I doubt that the people who designed the proposed new rugby stadium were interested in integrating it into the character of the city as it looks like an overgrown oyster. A lot of people, even supporters of the stadium, are against council plans to provide tens of millions of dollars of rate-payer' money for a new stadium. That includes me as I think the reputation of ‘ the House of Pain’ should be built on, not squandered and I would prefer to see Carisbrook Stadium spruced up.

For my latest art school e-Art project I started with the beautiful Railway Station window and inserted anti-stadium images: the charter from the ‘Stop the Stadium’ group and photos from the protest rally on 2 August 2008. I see the new image as a reminder to the Dunedin Council that heritage matters.
Posted by Elizabeth at 2:47 pm No comments: Links to this post

Greta (aka Adrenalentil) made the track 'Softest Thing' in the 1990s. During our school holidays this week I made a 'mash up', combining her sound track with videos of her family. I thought it a nice comment on the meaning of time, the combination of the techno track with images of then-undreamt-of children.
Posted by Elizabeth at 7:38 pm No comments: Links to this post