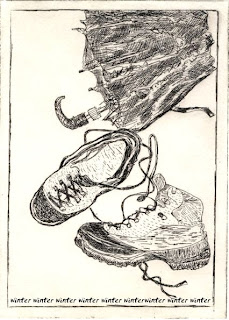 Boots and brolly is what we have been needing these last few weeks. These are mine, lying on my doormat. I thought them picturesque enough to make an etching of.
Posted by Elizabeth at 8:19 pm No comments: 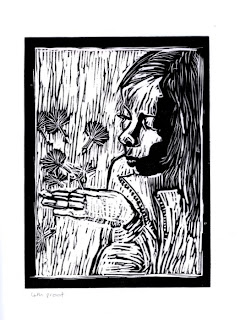 My first lino cut.
Posted by Elizabeth at 8:16 pm No comments:

Snow on the hills

It rained, it hailed, then it snowed. Today Dunedin feels like an alpine village. Bright sunshine but very cold with frost until lunch time. 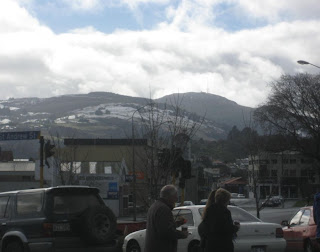 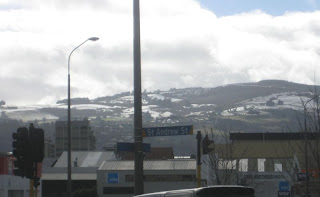 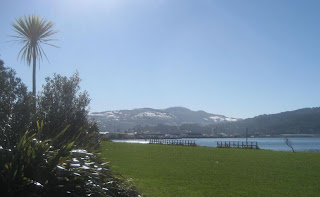 Posted by Elizabeth at 1:14 pm No comments: 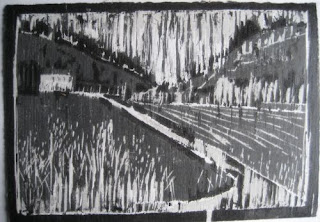 I read in the newspaper that the Beijing Olympics Opening Ceremony was wonderful. Ten out of ten they say. I can't find a single video of it anywhere on the Internet so I guess the Chinese officials and the TV stations have sewn copyright up. I have rapidly lost interest.
Posted by Elizabeth at 2:01 pm No comments: 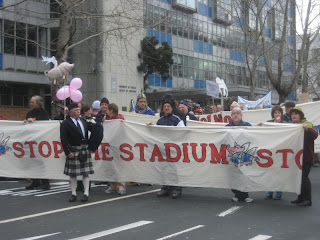 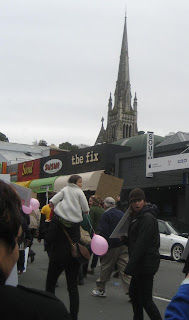 On Saturday a crowd of over 700 marched along the main street of Dunedin to the Octagon to protest against Council proposing to take a loan to fund a new Rugby Stadium for Dunedin.

An elderly woman marching next to me told me that she this was the first time she had ever participated in a demonstration. She said she had lots of friends who are against the stadium but who were not at the march, so she was representing them. She was carrying a hand painted sign saying 'No to the Stadium'.

Afterwards I followed a young couple down the street who had not been on the march. The man was becoming quite heated as he tried to persuade his doubtful partner that Dunedin needed the stadium. "Tauranga will get it instead of us", he said.
Posted by Elizabeth at 4:51 pm No comments: 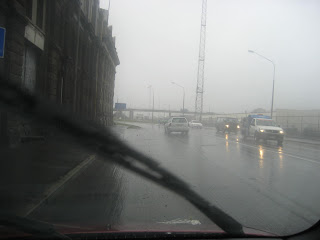 Dunedin was on the fringe of the big storm that hit NZ this week, but we got heavy rain regardless.
Posted by Elizabeth at 2:08 pm No comments: