The website is down...
Check this out .. it had me laughing out loud. Does that mean I am a geek? I don't think so.
Posted by Elizabeth at 2:47 pm No comments: 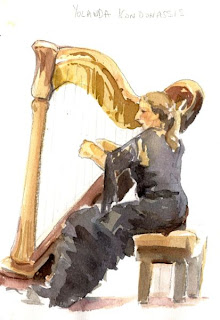 I drew this recently at a concert by a trio that included harpist Yolanda Kondonassis. I was sitting in the front row next to two high school students who told me their teacher told them to watch the harpist's feet as a harp has seven pedals.
Posted by Elizabeth at 2:39 pm No comments: 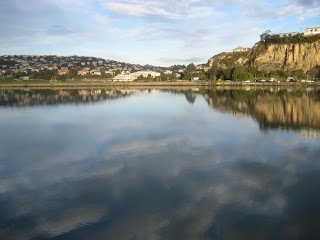 Five (car) minutes from central Dunedin on an inlet from Otago Habour is Andersons Bay. 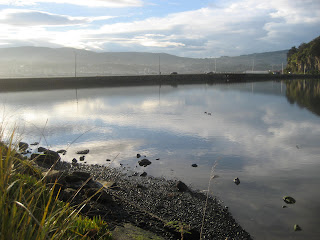 A causeway across the bay leads to the coast road of Otago Penninsula.

Posted by Elizabeth at 4:50 pm No comments: 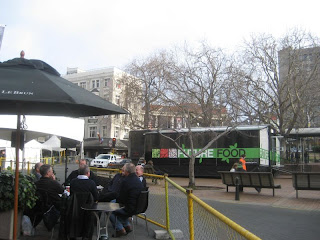 Footie fans at the Octagon. Science week was on as well in Dunedin and in the Future Food van you can see behind the footie fans I read that NZ has 0.3% of agricultural land under certified organic management. This compares to 2.7% for Australia, 3.9% in the UK and 14.2% in Austria. The chemical companies must love us.
Posted by Elizabeth at 8:04 am No comments: 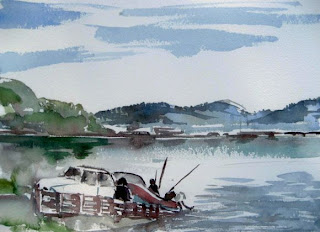 This group of boaties were pulling up their boat in the late afternoon yesterday. They seemed to be in a hurry and perhaps they were going to the rugby test.
Posted by Elizabeth at 3:42 pm No comments:

Dunedin basks in the sun on 12 July

I flew back from Sydney prepared for bitter cold but it was 18C and the shuttle bus driver was in shirt sleeves. Today was just as warm which is lucky for the rugby fans here for the NZ/SA test match. City shops are decorated in black and white and Carisbrook Stadium is sold out. 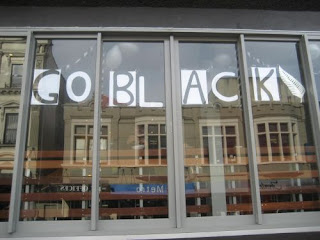 Proponents of the controversial proposed new $90m rugby stadium will probably argue that this means the stadium should be built. However, a radio presenter lamented this morning that the money already spent on feasibility studies for the proposed stadium would have paid for a brand new sewerage treatment works to keep the beaches clean. The presenter also said that a University study had concluded there was a 95% chance that the stadium would be bankrupt before its first year was out. A survey to assess support for the stadium has been done. It was sent to ratepayers, but only the males. If the head of a household was a woman the survey form was not sent. That says it all really. Maybe the recession will knock the proposal on the head. I notice mortgagee sales are prominent in the local paper today.

On a happier note, the local farmers market held on Saturdays at the Railway Station goes from strength the strength. Stall holders basked in the unseasonal warmth today and shoppers dawdled, listening to the piper standing in the gardens next door. The piper was a high school girl and accompanied on the drum by her smaller sister. They were a great team.

Posted by Elizabeth at 8:29 pm No comments: 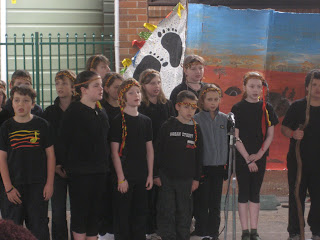 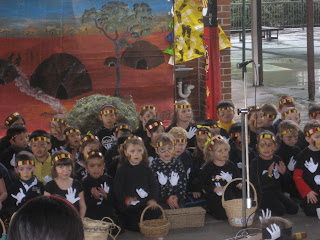 Children at Camdenville School in Newtown celebrate Naidoc week.
Posted by Elizabeth at 1:34 pm No comments: